The average radio station in the U.S. billed $256,321 in digital ad revenue in 2018 while the average market cluster of stations booked $1.15 million, according to new data from Borrell Associates. But averages are just that and there is a broad range of revenues per station based on market size and the importance the group attaches to its digital efforts.

In the smallest markets, the average digital revenue per station was just $48,258, but rose 14 times higher in the largest markets, ringing in at $688,313 in 2018. Growth rates last year also varied by market size, with a general trend of large-market stations seeing slower growth than smaller-market stations. For example, markets ranked 201 to 300 experienced a 32% growth rate from 2017 to 2018 but started from a much smaller base. Stations in the largest markets, where digital revenues are more robust, rose by a more modest 6%. The Borrell data shows growth rates generally increased as market size decreased: Markets 21 to 50 improved 8%, markets 51 to 100 ticked up 9% and markets 101 to 200 jumped 17%. 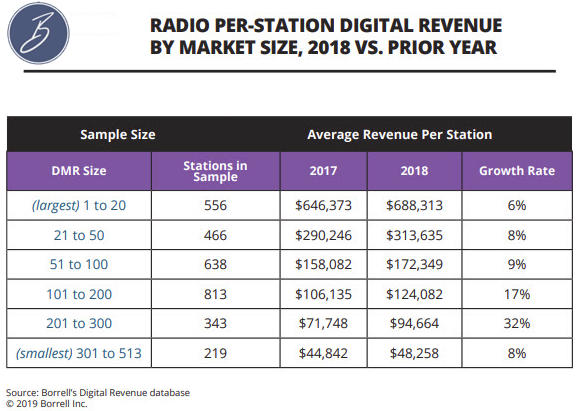 The reason why large-market stations are seeing slower growth than smaller-market stations can be summed up in one word: competition. “There's a helluva lot of competition in larger markets, and the product set is diverse and sophisticated,” Borrell Associates CEO Gordon Borrell told InsideRadio. “In cities on the fringe of a TV market area, you won't find TV and cable competitors plying the market with digital products, and you'll sometimes also find the local newspaper asleep at the wheel.”

Pulling back to look at digital revenue for market clusters, Borrell found the average ranged from $204,485 for small-market clusters to $3.25 million for large markets. Keep in mind that the median is typically about half as much as the average. “In most market groupings, about 60% of the market clusters get less than the average amount, indicating that averages are driven higher by a minority of high-performing stations,” the report says.
Posted 6:51:00 AM