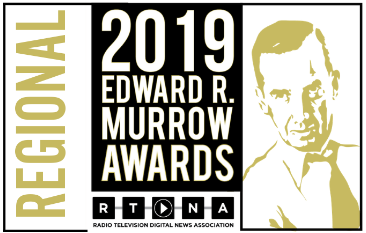 The Radio Television Digital News Association announced the winners of the 2019 Regional Edward R. Murrow Awards honoring outstanding achievement in broadcast and digital journalism, technical expertise and adherence to RTDNA’s Code of Ethics. A record 4,600 entries were submitted for this year’s competition. From this group, more than 720 regional winners were selected for breaking news, continuing coverage, investigative reporting, Overall Excellence and more.

“Public trust in journalism is threatened by a lack of understanding about the reporting process,” said RTDNA Chairman Jerry Walsh. “The Edward R. Murrow Awards are an opportunity for our industry to showcase what well trained, ethical local journalists are doing to better our communities on behalf of the public. We invite viewers and readers to learn more about the reporting process behind each of these stories, and to know this same process is happening every single day in preparation for every single newscast.” 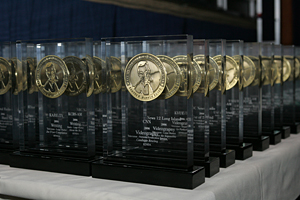 This year’s winners were judged in 14 regions and represent 309 local radio and TV newsrooms. These winners will move on to the national round of judging, which also includes digital and network news organizations as well as student awards. The national awards will be presented at RTDNA’s Edward R. Murrow Awards Gala at Gotham Hall in New York on Oct. 14, 2019.

“The journalists behind this year’s awards have a deep connection to the communities where they live,” said Dan Shelley, RTDNA’s Executive Director. “Their reporting demonstrated a level of care for and awareness of their communities that isn’t always popular to highlight when we talk about journalism. The stories they told go deeper than the surface of problems and celebrations, and gave viewers insight into topics and places they may not encounter in their daily lives. The Edward R. Murrow Awards demonstrate how journalists help us break out of our echo chambers, and contribute to productive public dialogue that brings communities together for positive change.”

With the most regional awards of any news outlet this year, WLRN-FM in Miami earned a total of 11 awards largely for ongoing local coverage of last year’s shooting at Marjorie Stoneman Douglass High School. Several stations won for stories that dove into race in our communities, including WGBH, KNKX, St. Louis Public Radio, WAMU and WBUR. This year’s winning local journalism also includes coverage of immigration, mental health and climate change.