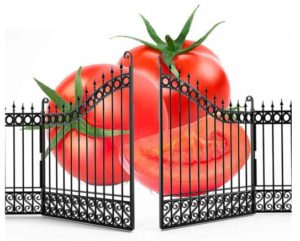 A new study confirms what even the casual listener already knows: that country radio is heavily male-dominated -- and provides "alarming" evidence that the gender imbalance is only getting worse.

Posted Friday by Billboard, "Gender Representation on Country Radio: A Study of Published Reports from 2000-2018" was published by the University of Ottawa's Jada E. Watson in consultation with WOMAN Nashville, a collective that advocates for equal opportunities and market share for women in the music industry.

Using country airplay reports published by Mediabase over the past four months, Watson examined the representation of the top 150 songs on year-end reports from the top of the millennium to last year, as well as 2018’s weekly airplay charts. They also investigated how male, female and male-female artists (i.e. bands or collaborations with men and women) are represented by total annual spins. Their findings indicate that the longstanding practice of programming women at 13 to 15 percent of a station’s playlist is not only self-perpetuating, it seems to be having a tangible effect on female artists’ careers.

This "13 to 15 percent rule" refers to the infamous 2015 interview in which radio consultant Keith Hill told country-radio trade publication Country Aircheck's Russ Penuell that if country radio were a salad, "The lettuce is Luke Bryan and Blake Shelton, Keith Urban and artists like that. The tomatoes in our salad are the females." After backlash from genre luminaries like Martina McBride, Miranda Lambert and Sara Evans, WOMAN Nashville confronted Hill on Twitter about the practice. He chalked up his decision-making to the results of market research he conducted in the 1990s on listener preference, and his belief that the genre's mostly female audience would prefer male voices.

"As noted in [my own 2016 study] study of Billboard's Hot Country Songs chart, Hill failed to consider long-term consequences of applying a programming quota to female artists," Dr. Watson writes. "By playing mostly men, radio is training listeners to appreciate just one type of voice, one type of sound, one type of narrative subject position or story."

Hill's strategy plays out in the below charts. Coding songs by the various possible combinations of men and women artists (e.g. male solo artist, male group, male solo artist featuring female artist, male-female ensemble, etc.), Watson shows, overall, that male artists are programmed more than female artists. This 19-year research period showed that male artists are played more than women by an average of 58.6 percent -- a 4.4 to 1 ratio -- when looking at all 2,850 songs on the year-end chart. Same on the weekly charts: men are programmed at a higher rate than women. Furthermore, men have more current and recurrent songs than women, by a margin of 52.5 percent and 58.4 percent, respectively. 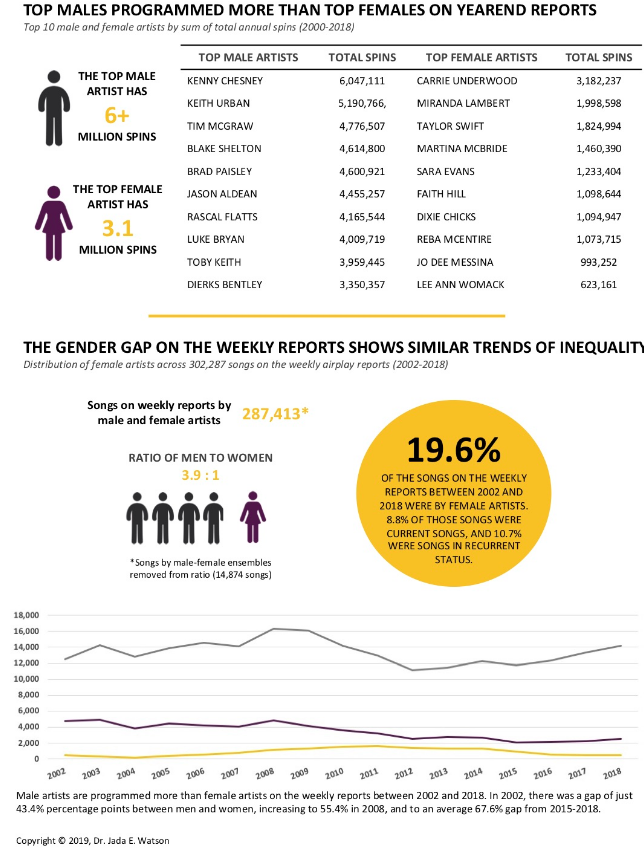 In addition to showing that this gap exists, Watson gives evidence that it's growing bigger in several-year increments. From 2000 to 2002, there is an average 36 percent difference between the number of songs by men and women; that disparity increases to 56 percent in 2003, and maintains a steady 60 percent between 2003 and 2013. In 2014, it grows to 76 percent, and stays that way until last year. "Female artists enter the new millennium with 50 songs (33.3 percent) on the year-end country airplay reports and declined to 17 songs (11.3 percent) by 2018," Watson writes. "The decline points to the self-fulfilling nature of the gender-based programming practices outlined above. Indeed, the results strongly suggest that radio is gradually programming fewer female artists every year."