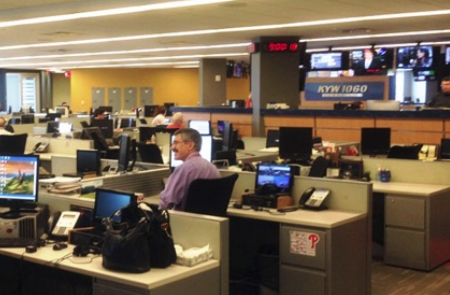 As the union at News Radio KYW 1060 AM called for a federal mediator for contract talks with Entercom Communications Inc., the all-news radio station laid off its head of digital news who also was past president of the Philadelphia chapter of the National Association of Black Journalists, sources have confirmed for philly.com.

KYW told Melony Roy, hired as a desk assistant in 2006, that her position was eliminated last Thursday, a day after the Screen Actors Guild-American Federation of Television and Radio Artists, or SAG-AFTRA, disclosed that it was seeking a mediator. Negotiations starting in August have stalled. The contract expired in October over such issues as the company’s desire to make its digital employees nonunion. Roy had no comment Monday.

The company confirmed that Roy is no longer with KYW but said that had nothing to do with the contract negotiations.

“It was the boy crying wolf, and then there was the wolf,” said Stephen Leshinski, the Philadelphia-area SAG-AFTRA executive director, referring to Roy. Leshinski doesn’t believe that that layoff was retribution. But he said that it “confirms our fears that as Entercom develops their digital strategy, it will impact the KYW staff and open up more outsourcing.”

Entercom has told Wall Street that it will cut costs as it also pays down its $1.7 billion in debt, much of it from buying 117 former CBS radio stations. Entercom also now finds itself dealing with unions in about 50 of its new stations, over such issues as staffing for websites and social media platforms.

Some of Entercom’s prized stations have all-news formats, such as KYW, which are popular with listeners but expensive to run when compared with music stations. Other Entercom news stations include 1010 Wins and WCBS Newsradio, both in New York, and WBBM Newsradio in Chicago.

An Entercom spokesperson said on Monday that "we prefer to negotiate directly with SAG-AFTRA and our employees, not publicly, and do not intend to comment further.” She added that Entercom has "been negotiating with SAG-AFTRA in good faith to reach fair agreements.”

The sticking points in the SAG-AFTRA talks at KYW are over union jurisdiction for digital employees and severance, the union says. Entercom would like to reduce severance payments by 50 percent to 90 percent, by capping the number of weeks that an employee qualifies for severance to 26 weeks and ceasing severance payments if a KYW employee lands a job at another radio station.