Apple Pushes Back On Spotify 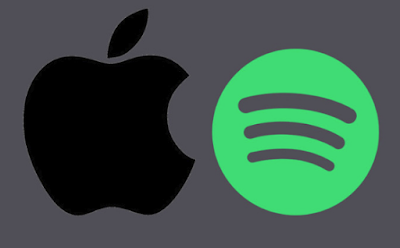 Apple is pushing back on Spotify's accusations that the iPhone maker is putting up barriers around the streaming service in order to bolster its own competing app, Apple Music.

The Hill reports Apple published a blog post on Thursday dismissing the arguments Spotify made in an antitrust complaint to the European Union, in which it said that Apple's efforts to tax and impose technical hurdles on its service were part of an effort to suppress Apple Music's top competitor.

Apple said Spotify is demanding special treatment and accused the company of exploiting the musicians that use its platform to reach listeners.

"Spotify wouldn't be the business they are today without the App Store ecosystem, but now they're leveraging their scale to avoid contributing to maintaining that ecosystem for the next generation of app entrepreneurs. We think that's wrong," Apple said in its statement.

"Underneath the rhetoric, Spotify's aim is to make more money off others' work," Apple added. "And it's not just the App Store that they're trying to squeeze -- it's also artists, musicians and songwriters."

Spotify's complaint alleges that Apple's conduct as both the owner of the App Store marketplace as well as a competitor within it puts rival services at a disadvantage and violates European antitrust law.
Posted 5:24:00 AM