Crown Media Family Networks, the company that owns the Hallmark cable channel, stopped working with its “Garage Sale Mysteries” star, Lori Loughlin, after she was charged in a college admissions scandal, it said on Thursday.

“We are no longer working with Lori Loughlin and have stopped development of all productions that air on the Crown Media Family Network channels” involving the actress, the company said in a statement.

Reuters reports Hallmark’s announcement follows an earlier one from LVMH’s Sephora beauty chain, which said it was ending its partnership with Loughlin’s daughter, Olivia. 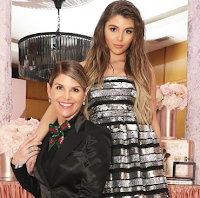 Products from her makeup collaboration had been removed from Sephora’s website by Thursday afternoon. It was not immediately clear whether her products were available in stores.

“After careful review of recent developments, we have made the decision to end the Sephora Collection partnership with Olivia Jade, effective immediately,” a Sephora representative wrote in an email on Thursday.

Loughlin and Mossimo Giannulli were accused on Tuesday of paying bribes of $500,000 in a scheme that involved cheating on college entrance exams to help their daughter and another daughter, Isabella Giannulli, get into the University of Southern California, according to court documents.

Loughlin and her husband were taken into federal custody and later released on separate $1 million bonds on Wednesday.

Days before Loughlin and her husband, fashion designer Mossimo Giannulli, were arrested for allegedly participating in a college admissions cheating scam to get their two daughters into college, their youngest, popular YouTuber Olivia Jade Giannulli spoke out about her dad’s former college experience in which he “faked” his way through his education, reports People.

During an interview with the Zach Sang Show posted on March 8, Olivia Jade, 19, said that she looks to her dad – who created the fashion line Mossimo – for “inspiration.”

“He didn’t come from a lot so it’s cool to see that he built it all himself,” she said. “He, like, built his whole entire brand and he wasn’t actually, like, I don’t know if I’m supposed to say this, ever enrolled in college. But he, like, faked his way through it and then he started his whole business with tuition money that his parents thought was going to college. That’s, like, such a different time. I don’t know if I was supposed to say that, but it’s okay.”

Also it was learned that Loughlin‘s daughters are dropping out of the University of Southern California — because they’re afraid of being bullied over the massive college admissions scam that has left them feeling like “a mess,” a report said Thursday.
Posted 2:18:00 AM