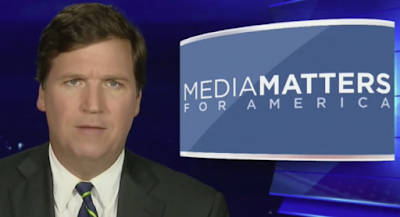 Following closely on its report that Tucker Carlson used profane language during interviews on a shock-jock radio show more than 10 years ago, Media Matters is scheduling organized protests outside the Fox News building in New York City.

According to Grabien, the protests are planned for Wednesday, and they’re receiving support from prominent alumni of the Obama Administration.

Media Matters is timing the protest to coincide with a meeting Fox News execs have scheduled with advertisers. CNN, which has mentioned the Tucker Carlson comments 82 times since Sunday, explains the strategy:
On the podcast Pod Save America, Obama vets Tommy Vietor, Jon Lovett, and Jon Favreau, used their show to encourage people to join the protest.


Exclusive: Tucker Carlson's sexual comments about a Miss Teen USA pageant are some of the most shocking yet - in new unearthed audio. pic.twitter.com/QCOzaYVYIC
— NowThis (@nowthisnews) March 13, 2019

The Week reports Carlson has pointedly refused to apologize for his decade-old comments, and when he was passing the network to fellow Fox News host Sean Hannity on Tuesday night, Hannity said he wanted to "give you a compliment. So Tucker was going to be off this week. ... But it becomes a busy news week and he's not going to take the mob's crap. And he came into work to stand up to this, and I want the great viewers of this channel to know that.”

He ended by telling Carlson to "have a great rest of vacation you were supposed to have."