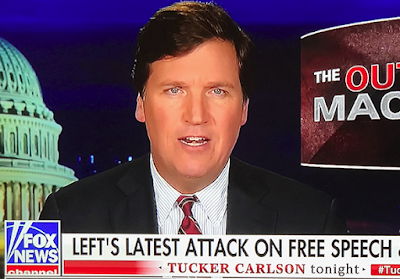 Fox News has not yet officially commented on remarks by Tucker Carlson, who faced a second day of scrutiny after the left-wing advocacy group Media Matters for America exhumed offensive comments he made on a shock-jock radio program about a decade ago, reports The NYTimes.

In excerpts published by Media Matters, Mr. Carlson, calling into the “Bubba the Love Sponge” show, mused in 2006 that “arranging a marriage between a 16-year-old and a 27-year-old is not the same as pulling a stranger off the street and raping her.”

On the Monday episode of his 8 p.m. program on Fox News, “Tucker Carlson Tonight,” the host cast himself as a target of a liberal “mob” and suggested that the political left wanted to shut down his network.

“Fox News is behind us as they have been from the very first day,” Mr. Carlson told viewers. He added: “We will never bow to the mob. Ever. No matter what.”

As Mr. Carlson was speaking, Media Matters released a second batch of excerpts from his appearances on the “Bubba” radio program, including a clip from 2008 in which Mr. Carlson described Iraq as “a crappy place filled with a bunch of, you know, semiliterate primitive monkeys — that’s why it wasn’t worth invading.” Calling into the show in 2006, Mr. Carlson said of Barack Obama, then an Illinois senator, “How is he black, for one thing? He has one white parent, one black parent.”

The Time points out  Fox News is not the only cable news network that has had to grapple with a star anchor’s troubling past remarks.

Joy-Ann Reid, the MSNBC host, apologized last year after revelations that she had published numerous homophobic posts and jokes on a blog that is now defunct. She also claimed without evidence that the homophobic remarks had been inserted by hackers intent on harming her reputation. MSNBC did not discipline Ms. Reid.

Advertisers have boycotted “Tucker Carlson Tonight” in the recent past, and it’s not immediately clear whether the ad load featured on Monday’s broadcast was at the show’s current norm. But the program featured longer commercials from direct-response advertiser MyPillow, a regular Fox News client. Bayer AG, the pharmaceutical manufacturer, aired commercials for Clairtin-D and One-A-Day vitamins.

Fox News has grappled for several months with efforts by advocacy organizations to erode Madison Avenue’s ties to the network’s primetime schedule. Some sponsors have pulled their advertising from “Tucker Carlson Tonight” or Laura Ingraham’s “The Ingraham Angle” after remarks made by the hosts in 2018 and amid subsequent protests. Those commercials have been moved elsewhere on the Fox News schedule, and those two programs have in recent months sported a narrower roster of national advertisers.

Fox News has supported both hosts during the scrutiny and said it would not let them be “censored by agenda-driven intimidation efforts.”
Posted 2:05:00 AM