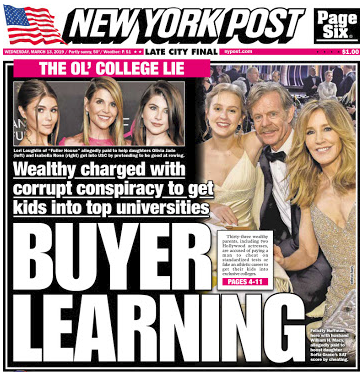 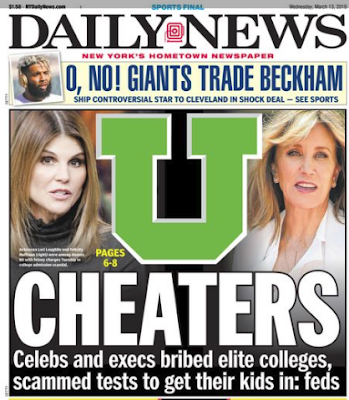 The charges were unsealed Tuesday against coaches and others, and involved several elite schools, including Wake Forest University, Stanford, Yale, Georgetown and University of Southern California.

Huffman and Loughlin (and the 50+ others) are being charged with conspiracy to commit mail fraud and honest services mail fraud. The alleged fraud was organized by a California businessman who promised to help kids get into the school of their choice, by enlisting SAT/ACT administrators and college coaches. According to TMZ, court records show the stars—and others—shelled out as much as $6 million to get their kids into these schools.

“Dozens of individuals involved in a nationwide conspiracy that facilitated cheating on college entrance exams and the admission of students to elite universities as purported athletic recruits were arrested by federal agents in multiple states and charged in documents unsealed on March 12, 2019, in federal court in Boston,” a release from the U.S. Attorney’s Office in Massachusetts says.


Huffman was reportedly arrested Tuesday and will be released on bond. Huffman and her husband William H. Macy reportedly made a charitable contribution of $15K to participate in a college entrance cheating scheme. Macy was not arrested. (Their daughter reportedly received a 1420 on her SAT, an uptick of 400 points from her PSAT). Loughlin and her husband Mossimo Giannulli (the founder of the Mossimo clothing brand) allegedly shelled out $500K to have their two girls designated as recruits of USC. One of their daughters, Olivia Jade, is a prominent social media influencer. Both Olivia and her older sister Isabella Rose are still currently students at USC. Their fates, and those of the other students in the scandal, are unknown.

Loughlin, best known for her role as Aunty Becky on Full House, took a flight to L.A. Tuesday and surrendered at the Central District Court. At least 13 defendants, including Huffman and Giannulli, appeared in federal court in L.A. late in the day Tuesday.

The following defendants were charged in a criminal complaint with conspiracy to commit mail and wire fraud:

Gregory Abbott, 68, of New York, and his wife, Marcia Abbott 59. He is founder and chairman of International Dispensing Corp., a food and beverage packaging company.

Todd Blake, 53, of San Francisco, an entrepreneur and investor.

Jane Buckingham, 50, of Beverly Hills, Calif., CEO of a boutique marketing company Trendera, which has offices in New York and Los Angeles.

Gordon Caplan, 52, of Greenwich, Conn., co-chairman of Willkie Farr, which says it has 700 lawyers in 10 offices in six countries.

I-Hin "Joey" Chen, 64, of Newport Beach, Calif., operates a provider of warehousing and related services for the shipping industry.

Elisabeth Kimmel, 54, of Las Vegas, owner and president of a media company.

Devin Sloane, 53, of Los Angeles, founder and CEO of provider of drinking and wastewater systems.

Homayoun Zadeh, 57, of Calabasas, Calif., an associate professor of dentistry.

Robert Zangrillo, 52, of Miami, founder and CEO of Dragon Global.

William Rick Singer, 58, of Newport Beach, Calif., owner of the Edge College & Career Network and CEO of the Key Worldwide Foundation, was charged in an information with racketeering conspiracy and money laundering.

John Vandemoer, 41, of Stanford, Calif., the former sailing coach at Stanford University, was charged in an information with racketeering conspiracy.

David Sidoo, 59, of Vancouver, Canada, was charged in an indictment with conspiracy to commit mail and wire fraud. Sidoo was arrested on Friday in San Jose, California, and appeared in U.S. District Court for the Northern District of California on Monday. A date for his initial appearance in federal court in Boston has not been scheduled.

The following people were charged with racketeering conspiracy:

Igor Dvorskiy, 52, of Sherman Oaks, Calif., director of a private elementary and high school in Los Angeles and a test administrator for the College Board and ACT.

Martin Fox, 62, of Houston, president of a private tennis academy in Houston.

Steven Masera, 69, of Folsom, Calif., accountant and financial officer for the Edge College & Career Network and the Key Worldwide Foundation.

Jorge Salcedo, 46, of Los Angeles, former head coach of men's soccer at the University of California at Los Angeles.

Niki Williams, 44, of Houston, assistant teacher at a Houston high school and test administrator for the College Board and ACT.

The following defendant was charged in a criminal complaint with conspiracy to commit mail fraud and mail fraud:

Michael Center, 54, of Austin, Texas, head coach of men's tennis at the University of Texas at Austin.
Posted 8:21:00 AM