AOC At SXSW: You Know, Like, Whatever, You Know? 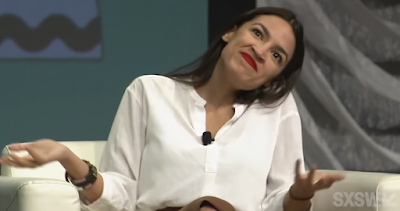 Over the course of a wide-ranging 80-minute interview at South by Southwest on Saturday, the 29-year-old left-wing lightning rod let loose a litany of “likes,” “you knows,” and “whatevers.”

In between calling America “garbage,” capitalism “irredeemable,” and President Reagan racist, AOC said “like” no fewer than 71 times, “You know” at least 34 times, and “whatever” five times.

She also said “ummm” too many times to count. The popular progressive personality also has a penchant for peppering her prose with, “I think” and “I guess.”

Speaking of her strategy of not trying to convince critics “of anything,” AOC advised: “Stop trying to win people over, stop trying to enter a conversation thinking that you’re going to, like, ‘aha’ them into changing their minds. And so, I think, that, you know, we’ve kind of lost the art of conversation. So when I enter a conversation with someone I actually try to learn more about where they’re coming from, like I try — I actually use it as an experience to — like, let’s say, I’m talking to someone who’s saying something really racist and they don’t even realize that they’re saying something really racist, I — I asked some questions because I’m interested, I’m fascinated by that. How does that work, you know?”

Fascinating, sure, but she was hardly finished: “But you have to — we have to learn to, like, really disarm ourselves in these conversations first of all, because we approach them with so much hostility and, like, they get mad and we get mad and all of these things and — and we have — so, part of it is, like, emotional work. And — and the second part of it is intention, like, what are you trying to get out of this conversation?”


According to the folks at Grabien, this is but a small sampling. There was so, so much more. Which is why we compiled everything into one short supercut featured above.