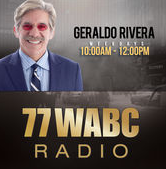 Talk Show host Geraldo Rivera believes he's on the way out at WABC 770 AM.  Rivera today posted a message on Facebook which stated he has been informed that current Cumulus suits are not going to honor a handshake deal he said made with former corporate programming chief John Dickey. The handshake deal was meant to continue his local radio deal with Cumulus for another year without a formal contract, according to Rivera.

Rivera said he found out about it Wednesday and stated, "On the eve of Thanksgiving is especially (the news is) upsetting."

There has been no confirmation or statement from Cumulus Corporate.


To fans of my #77WABCradio show this may be goodbye. I’ve just been informed by Mary.Berner@Cumulus.com the new...
Posted by Geraldo Rivera on Wednesday, November 25, 2015

Rivera is also a pundit for the Fox News Channel.
Posted 3:43:00 PM