In 1925..."The Grand Ole Opry" debuted on WSM, Nashville under the name "Barn Dance". The first artist to perform on the show was fiddler Uncle Jimmy Thompson.

It didn't settle on a name until June 1928. The Opry got its name by an unusual coincidence: Soon after Program Director George D. Hay started his show, WSM radio joined the NBC radio network. Since the program followed a performance on the network called the Metropolitan Grand Opera. So, Hay decided to call his program the Grand Ole Opry.

Hay was born in Attica, Indiana. In Memphis, Tennessee, after World War I, he was a reporter for the Commercial Appeal, and when the newspaper launched its own radio station, WMC, in January 1923, he became a late-night announcer at the station. His popularity increased and in May 1924 he left for WLS in Chicago, where he served as the announcer on a program that became National Barn Dance.

On November 9, 1925 he moved on to WSM in Nashville. Getting a strong listener reaction to 78-year-old fiddler Uncle Jimmy Thompson, Hay announced the following month that WSM would feature "an hour or two" of old-time music every Saturday night. He promoted the music and formed a booking agency.

In the 1930s the show began hiring professionals and expanded to four hours; and WSM, broadcasting by then with 50,000 watts, made the program a Saturday night musical tradition in nearly 30 states. In 1939, it debuted nationally on NBC Radio. The Opry moved to a permanent home, the Ryman Auditorium, in 1943. As it developed in importance, so did the city of Nashville, which became America's "country music capital". The Grand Ole Opry holds such significance in Nashville that its name is included on the city/county line signs on all major roadways. The signs read "Music City | Metropolitan Nashville Davidson County | Home of the Grand Ole Opry". 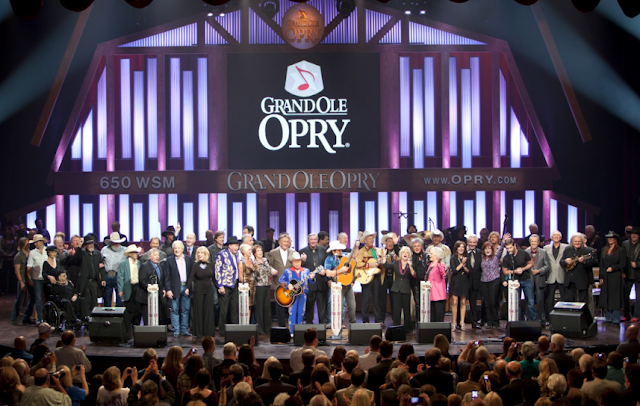 The Grand Ole Opry is broadcast live on WSM-AM at 7 p.m. CT on Saturday nights.

The Opry can also be heard live on Willie's Roadhouse on channel 59 on Sirius XM Satellite Radio. A condensed radio program, America's Opry Weekend, is syndicated to stations around the United States. The program is also streamed on WSM's website.

ABC broadcast the Grand Old Opry as a monthly series from 1955–56. PBS televised annual live performances from 1978 to 1981.  In 1985, The Nashville Network began airing an edited half-hour version of the program as Grand Ole Opry Live; the show moved to Country Music Television (expanding to an hour in the process), and then to the Great American Country (GAC) cable network with its Opry Live show currently on hiatus.


In 1932...Groucho Marx performed on radio for the first time.


In 1960...The CBS Radio Network expanded its hourly news coverage from 5 to 10 minutes.


In 1960..."Are You Lonesome Tonight" by Elvis Presley peaked at number one on the pop singles chart.


In 1993...radio & TV host Garry Moore died of emphysema at age 78.  He successfully combined genial humor with a pleasant personality and relaxed style that made him a favorite with audiences, both radio & TV, whether in a variety format or on panel shows. (I’ve Got a Secret, To Tell the Truth.)


In 2011...Comedian/Radio personality (Opie and Anthony) Patrice O'Neal died of complications from a stroke suffered the previous month at the age of 41.
Posted 4:59:00 AM