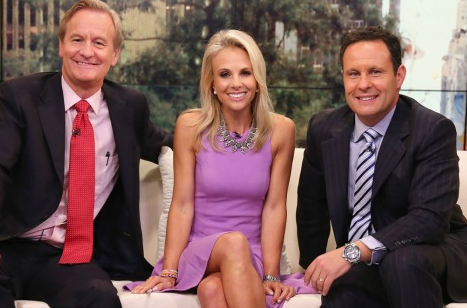 Elisabeth Hasselbeck will be leaving Fox & Friends at the end of the year in order to spend more time with her three children, she said in a statement Monday.

The 38-year-old TV personality has been a co-host on the show since 2013, when she left her job as a commentator on The View to replace Gretchen Carlson.

The Daily Mail reports Hasselbeck will finish the year on Fox & Friends and a rotating group of co-hosts will join mainstays Steve Doocy and Brian Kilmeade until a full-time replacement is found.

She is married to former pro-football quarterback and current ESPN analyst Tim Hasselbeck.

Hasselbeck commented in a statement:


'Throughout my 14 years working in television, I have never experienced a more positive and thoughtful atmosphere than Fox News Channel, thanks to the strong leadership of [Fox News Chairman & CEO] Roger Ailes, who has created the best working environment a woman and mother could ask for.

'His understanding, compassion, and kindness was exemplified when I shared with him that I am entering into a season where I want to start my day with my children first, and he offered his blessing to do so.

'With a heart full of gratitude and the peace that God has given me, I am confident that this personal decision is the right one for our family, and we will be joining all of you watching Fox & Friends each morning as we get ready for school together,' the statement reads.

Hasselbeck's decision to leave the show brings her nearly 15 years in television to a pause. She first gained national attention as a competitor on the 2001 season of Survivor and went on to spend nearly a decade as one of the ladies on the The View.
Posted 3:08:00 AM