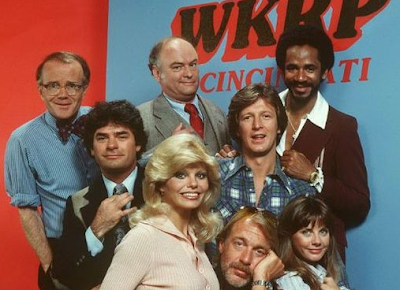 WKRP in Cincinnati was an American sitcom that featured the misadventures of the staff of a struggling fictional radio station in Cincinnati, Ohio. The show was created by Hugh Wilson and was based upon his experiences working in advertising sales at Top 40 radio station WQXI 790 AM in Atlanta. Many of the characters and even some of the stories (including season 1 episode 7, "Turkeys Away") are based on people and events at WQXI.

Like many other MTM productions, the humor came more from running gags based on the known predilections and quirks of each character, rather than from outlandish plots or racy situations,[citation needed] since the show has a realistic setting. The characters also developed somewhat over the course of the series.

WKRP premiered September 18, 1978 on the CBS television network, and aired for four seasons and 88 episodes through April 21, 1982. During the third and fourth seasons, CBS repeatedly moved the show around its schedule, contributing to lower ratings and its eventual cancellation.
Posted 3:58:00 AM