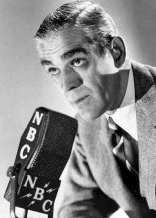 In 1887...Boris Karloff was born William Henry Pratt in London.

In a 50 year acting career highlighted by four Frankenstein films, he found time to make an impact in horror radio & TV productions.  He is still heard today as the narrator of the annual TV cartoon favorite, How the Grinch Stole Christmas.

For his contribution to film and television, Boris Karloff was awarded two stars on the Hollywood Walk of Fame, at 1737 Vine Street for motion pictures, and 6664 Hollywood Boulevard for television.

In 1889…In San Francisco, the Palais Royal Hotel installed the first coin-operated machine that, by about 1940, was known as a "jukebox." In the beginning it was a crude slot-machine apparatus connected to an Edison phonograph which, upon receiving a coin, unlocked the mechanism, allowing the listener to turn a crank that simultaneously wound the spring motor and placed the reproducer's stylus in the starting groove. This was before the time of vacuum tubes, so there was no amplification. The music was heard via one of four listening tubes. Despite its then-high price of a nickel a song, the new contraption took in $1000 in its first six months of operation.

After starting as a Disney animator & radio deejay, he started playing heavies in films & on radio shows such as Gunsmoke, Suspense, Escape and Yours Truly Johnny Dollar.  He starred in The Hermit’s Cave and Frontier Gentleman on radio, and was Palladin in CBS Radio’s Have Gun Will Travel.  TV series credits include Young Maverick, How the West was Won, Temperatures Rising, the Doris Day Show & the Don Knotts Show.

In 1938…Bob Hope and Shirley Ross recorded his future theme song, "Thanks For The Memory," for the soundtrack of the motion picture "The Big Broadcast of 1938."

Also on this date in 1996,  Hope set a record for the longest continuous contract in the history of radio and television when his last TV special aired. Hope had been with N-B-C for 60 years.

In 1959…Alan Freed was dismissed from his daily television show, "The Big Beat," over allegations that he accepted money to play certain records. Freed denied any wrongdoing.


In 1962…The Beatles did a ten-minute audition for BBC Television at St. James' Church Hall in London. Four days later, Brian Epstein received a polite rejection letter from the BBC. They eventually made it on the BBC in 1963.

In 1964…The Rolling Stones were late arriving for the BBC radio shows, "Top Gear" and "Saturday Club" and as a result were banned by the BBC for "unprofessionalism."

In 1967…San Francisco disc jockey Tom Donahue, inventor of "classic rock" and "deep cut" radio, told Rolling Stone magazine, "Top Forty radio, as we know it today and have known it for the last ten years, is dead, and its rotting corpse is stinking up the airwaves."

Considered the most influential figure in the history of country music, Acuff rose to fame in the 1930’s when radio was more important than records, so his chart hits were relatively few. But he made country standards of songs like “The Wabash Cannonball,” “The Great Speckle Bird,” “Fireball Mail” and “Night Train to Memphis.”

In 1993….FCC makes C-QUAM AM stereo standard.  WBZ-AM Boston playing Christmas music on Christmas Eve 1993 in C-Quam AM Stereo. This was recorded via skyway 480 miles from Boston in Lockport, NY, near Buffalo.