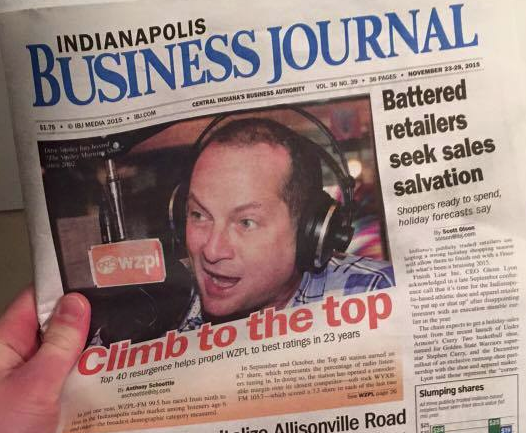 In just one year, WZPL 99.5 FM  has raced from ninth to first in the Indianapolis radio market among listeners age 6 and older, which prompted the Indianapolis Business Journal to take a closer look.

In September and October, the Top 40 station earned an 8.7 share, which represents the percentage of radio listeners tuning in. In doing so, the station has opened a considerable margin over its closest competitor—soft rock WYXB 105.7 FM—which scored a 7.3 share in each of the last two months, according to New York-based The Nielsen Co.

For WZPL, the numbers are the highest since the spring of 1992.

WZPL has seen its year-over-year share grow 3.4 points, from 5.3 in October 2014, while many other stations have been fairly flat or, in some cases, on the decline. 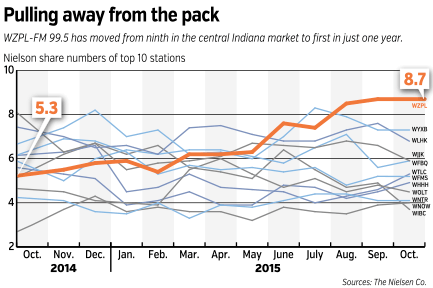 As strong as WZPL is overall, it’s even stronger with its primary target audience: women. In certain time slots, nearly one in four women ages 18 to 34 who are listening to radio are tuned to WZPL, according to Nielsen. In the 18-to-49 segment, the station is nearly as strong.

The numbers are significant for revenue.

Among women age 25 to 54—one of the most sought-after segments for ad buyers—WZPL has held the No. 1 spot for seven consecutive months, according to Nielsen.

But WZPL isn’t just for women. The Pennsylvania-based Entercom Communications-owned station has been No. 1 with all listeners age 25 to 54 for four consecutive months, according to Nielsen.

The foundation for the station’s ratings growth was laid in January, Ammons said, when WZPL commissioned a market study. The station received the results in late February and started making programming changes in early March.

“There had been a lot of changes in the market and we wanted to get the lay of the land,” he said. “We wanted to tell the future before it happened.”

In March, WZPL shuffled a couple of on-air personalities and leaned toward music by Taylor Swift, Fall Out Boy and Demi Lovato and away from electronic dance music and hip-hop.

The market research also told WZPL officials how much their listeners liked the station’s community events—including Jingle Jam, coming up next month.