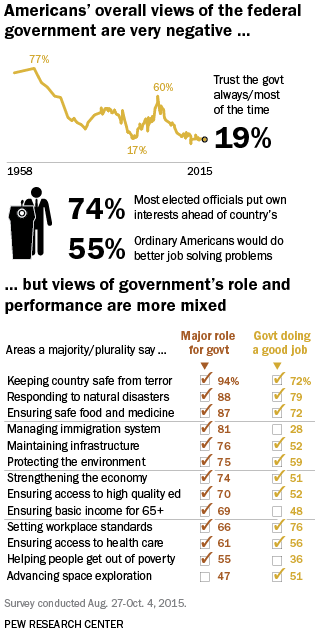 A year ahead of the presidential election, the American public is deeply cynical about government, politics and the nation’s elected leaders in a way that has become quite familiarm according to results just-released by the Pew Research Center.

Currently, just 19% say they can trust the government always or most of the time, among the lowest levels in the past half-century. Only 20% would describe government programs as being well-run. And elected officials are held in such low regard that 55% of the public says “ordinary Americans” would do a better job of solving national problems.

Yet at the same time, most Americans have a lengthy to-do list for this object of their frustration: Majorities want the federal government to have a major role in addressing issues ranging from terrorism and disaster response to education and the environment.

And most Americans like the way the federal government handles many of these same issues, though they are broadly critical of its handling of others – especially poverty and immigration.

A new national survey by Pew Research Center, based on more than 6,000 interviews conducted between August 27 and October 4, 2015, finds that public attitudes about government and politics defy easy categorization.

The public expresses mixed opinions about the effect of several major nongovernmental institutions on the country. But in nearly all cases, the influence of these institutions is viewed more positively than that of the federal government – and especially Congress. 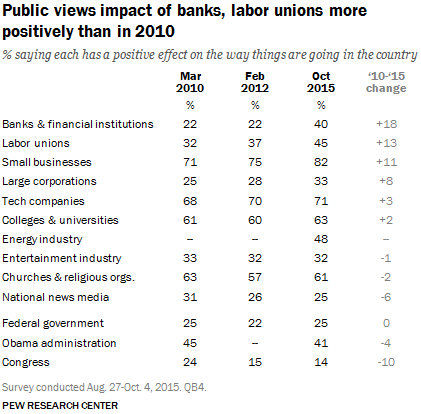 Of 10 nongovernmental institutions included in the survey, majorities say four are having a positive effect on the way things are going in the country: small businesses (82% positive), technology companies (71%), colleges and universities (63%) and churches and other religious institutions (61%).

The public is more divided over the impact of three other institutions – the energy industry (48% positive), labor unions (45%) and banks and financial institutions (40%).

And three others are viewed as having decidedly negative influence on the country. Just 33% say large corporations have a positive impact, 32% say that about the entertainment industry, and just 25% say the national news media has a positive effect. Majorities say all three have a negative effect on the way things are going in the U.S. 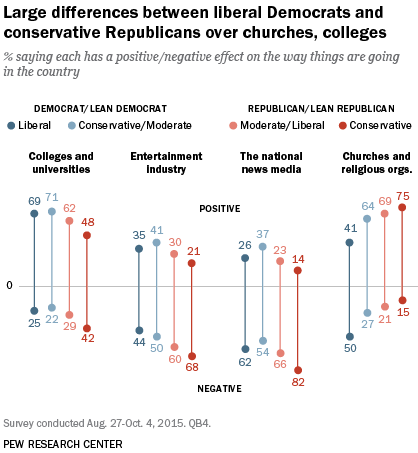 Majorities of adults, regardless of partisan and ideological affiliation, say the national news media is having a negative effect on how things are going in the country today. However, conservative Republicans and Republican leaners are particularly critical: 82% say the national news media has a negative impact, while just 14% say it has a positive impact.

Republicans are also more critical of the entertainment industry than are Democrats: Majorities of moderate and liberal Republicans and Republican leaners (60%) and their conservative counterparts (65%) say that the entertainment industry has a negative effect on the United States. Half of conservative and moderate Democrats and 44% of the party’s liberals view its impact negatively.