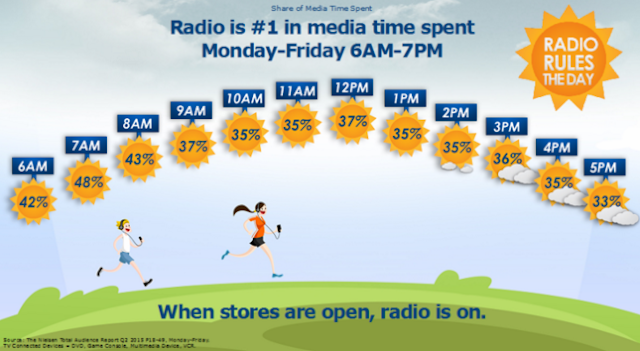 Nielsen shows that 90 Million are reached in the Portable People Markets that represent half of the total U.S. population. So double that and 180 million Americans are reached by radio on Black Friday.

What if you could cross off two-thirds of your holiday shopping list on the day after Thanksgiving?

That's what advertisers get when they use radio on Black Friday. Nielsen's analysis of Black Friday 2014 found 63% of all 25- to 54-year-olds are reached by radio on the busy shopping day. Reach a majority of holiday shoppers when they are out and about on the biggest retail day of the year.

The opportunity for radio on Black Friday and throughout the holiday shopping season (36 shopping days until Christmas!) is discussed in full in this new blog post by Cumulus/Westwood One Chief Marketing Officer Pierre Bouvard.