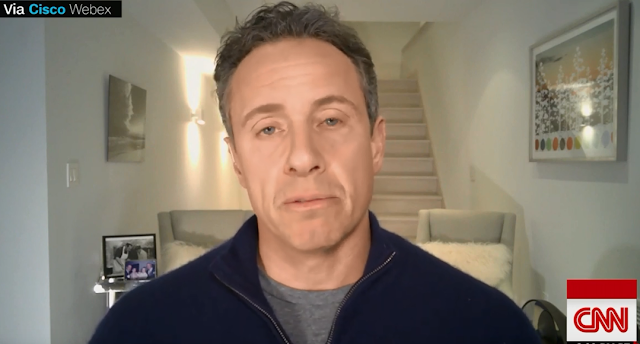 A bleary-eyed Chris Cuomo, saying he wanted to be a cautionary tale for his audience, anchored his CNN show from his basement Tuesday after testing positive for the coronavirus, the Associated Press reports.

“Brace yourself,” Cuomo told viewers, “not for a hoax. But for the next few weeks of scary and painful realities. This is a fight. It’s going to get worse. We’re going to suffer.”

Cuomo looked pale, his eyes watery and red-rimmed. He took a few deep breaths to compose himself. He repeated himself. Even Gupta said he didn’t look good, and said he’d call later to talk about a tightness Cuomo was feeling in his chest.


The 49-year-old newsman, whose brother, New York Gov. Andrew Cuomo, has logged just as much television airtime lately with daily briefings on how the disease is affecting his state, said earlier that he knew it was a matter of time because of how often he was exposed to people. He said he’s staying in the basement of his Long Island home to protect himself from his wife and children.

Some competitors, including Sean Hannity and Geraldo Rivera of Fox News Channel, and Joy Reid and Ali Velshi of MSNBC, sent best wishes to Cuomo through social media Tuesday.

One of the most unsettling things about the disease, he said, is hearing from doctors that there really isn’t much he can do now except “suck it up.”

“The best medicine is not to get it — prevention,” he said in a pre-show discussion with colleague Anderson Cooper.

Most people who get the virus have mild to moderate symptoms and recover. But for older people, and those with underlying medical conditions, the disease can be dangerous. More than 3,000 people have died in the U.S. alone.
Posted 3:32:00 AM