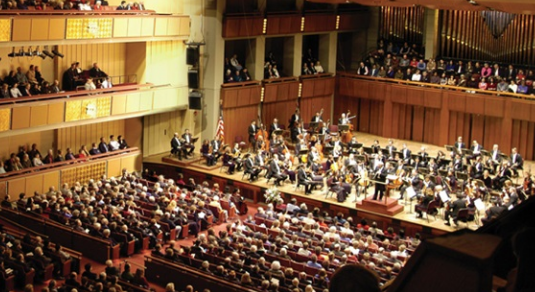 The John F. Kennedy Center for the Performing Arts informed members of the National Symphony Orchestra that they would no longer be paid just hours after President Trump signed a $25 million taxpayer bailout for the cultural center, according to an email obtained by the Washington Free Beacon.

Nearly 100 musicians will no longer receive paychecks after April 3, according to an email from the orchestra's Covid-19 Advisory Committee.

"The Covid-19 Advisory Committee was broadsided today during our conversation with [Kennedy Center President] Deborah Rutter," the email says. "Ms. Rutter abruptly informed us today that the last paycheck for all musicians and librarians will be April 3 and that we will not be paid again until the Center reopens."

The email went out to members on Friday evening, shortly after President Trump signed the $2 trillion CARES Act, a stimulus package intended to provide relief to people left unemployed by the coronavirus pandemic. Congress included $25 million in taxpayer funding for the Kennedy Center, a provision that raised eyebrows from both Democrats and Republicans, but ultimately won support from President Trump.

The bailout was designed to "cover operating expenses required to ensure the continuity of the John F. Kennedy Center for the Performing Arts and its affiliates, including for employee compensation and benefits, grants, contracts, payments for rent or utilities, fees for artists or performers," according to the law's text. The arts organization decided that the relief did not extend to members of the National Symphony Orchestra, its house orchestra.

"Everyone should proceed as if their last paycheck will be April 3," the email says. "We understand this will come [as a] shock to all of you, as it did to us."

The Kennedy Center did not return request for comment.
Posted 1:19:00 AM