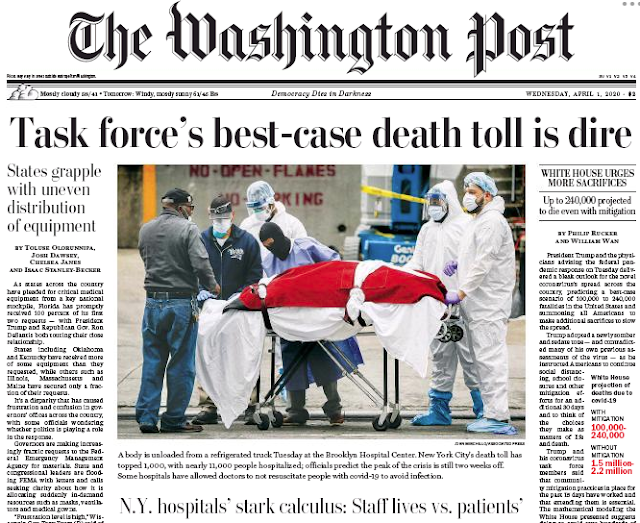 The White House projected the U.S. could face 100,000 to 240,000 deaths from the coronavirus pandemic, as President Trump warned Americans to brace for an unprecedented crisis in the days ahead, The Wall Street Journal reports.

“This could be a hell of a bad two weeks,” Mr. Trump said during a briefing at the White House on Tuesday afternoon, then quickly expanded upon his own dire assessment: “This is going to be three weeks like we’ve never seen before.”


The president’s comments on Tuesday marked his starkest warning to date about the pandemic that is coursing its way across the country, with a peak of infections in the U.S. still projected to be at least two weeks away.

Trump, appearing at the briefing with two of his top medical advisers, repeatedly urged Americans to follow federal social-distancing guidelines, which have now been extended through the end of April.

“We’ve got to brace ourselves,” said Dr. Anthony Fauci, a member of the White House coronavirus task force. But Dr. Fauci said that continued protective social-distancing measures could help prevent the worst-case scenario. 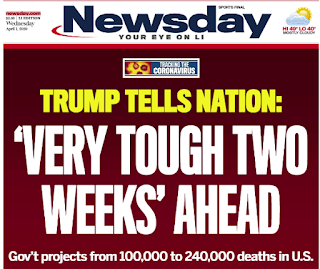 “In the next several days to a week or so, we’re going to continue to see things go up,” Dr. Fauci said. “We cannot be discouraged by that. Because the mitigation is actually working, and will work.”

Nearly half of the 50 states have now reported more than 1,000 confirmed cases of Covid-19, the respiratory disease caused by the new coronavirus. And much of America is expected to experience extended closures of schools, offices, restaurants and other venues as concerns about a coming surge in patients have pushed mayors and governors to take steps unprecedented in modern times to fight the contagion.

State leaders have extended, and in some cases expanded, stay-at-home orders late into the spring or indefinitely, while the Trump administration lengthened its social-distancing guidelines through April 30.

The apex of the pandemic is expected to occur sooner in New York, the hardest-hit state with 75,795 confirmed cases and 1,550 deaths.