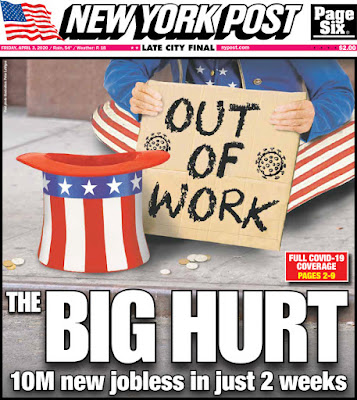 Nearly 10 million American jobs have been lost in just two weeks, the Labor Department reported yesterday. That stunning number has no parallel in modern history for its size or for the speed with which it occurred. Yet it is probably understated. An unknown number of people have not yet been able to file for benefits because state systems are overwhelmed.

The pain is global. Almost a million people have applied for welfare in Great Britain in the past two weeks. Austria has its highest unemployment since the end of World War II. And, millions of French workers have applied for government subsidies.

Bank of America analysts said yesterday that a recession is inevitable, and will be “deeper and more prolonged” than was evident only two weeks ago.

Worldwide, the number of coronavirus infections has surpassed one million and more than 48,000 lives have been lost. The United States has more cases than any other nation at about 234,000. There are signs that the rate of infection is slowing in Italy and Spain, both hard-hit by the virus.

Unlike the 2008 financial crisis, the American economy has abruptly shuttered in response to the COVID-19 outbreak, instead of a more gradual wind-down. It’s more severe, at least early on, than previous economic slowdowns, and it’s hitting the country’s frontline workers — and those in the lowest income bracket — hardest and quickest.

The unemployment rate is expected to show a hit from the pandemic when the Department of Labor releases its jobs report Friday, with that number expected to increase further in next month’s release. American households, especially those earning less than $50,000 per year, are ill-prepared to handle that spike in unemployment, according to new Morning Consult data. 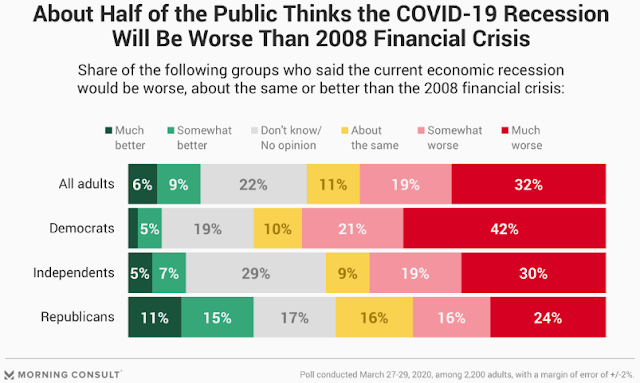 Depending on how extensive government-provided economic stimulus is — to individuals and small businesses in particular — it’s likely that many won’t be able to weather a long economic downturn. Thirty-four percent of adults in the under-$50,000 income bracket said they would run out of savings in three months if someone in their household lost their job, while 18 percent said they have no savings to fall back on at all.

➤WHEN TO EXPECT THOSE TREASURY CHECKS: People who included direct deposit information with their 2018 or 2019 tax returns should receive any payment they are due during the week of April 13. That’s about 60 million of us. But the IRS won’t start issuing paper checks until May 4, according to CNN.

Treasury Secretary Stephen Mnuchin announced yesterday that the IRS will soon have a website that allows taxpayers to enter their direct deposit information if they have not already done so.
The stimulus bill directs that $1,200 be paid to single taxpayers who earn $75,000 or less in adjusted gross income, or couples making $150,000 or less, plus $500 per child.

➤CDC TO RECOMMEND WEARING MASKS: The Center for Disease Control is expected to recommend that all Americans wear cloth masks when they must go out in public while the shutdown lasts. There is a growing belief that it can help prevent spread of the coronavirus infection. The agency is expected to recommend cloth but not surgical masks, which are in short supply.

➤SMALL BUSINESS BAILOUT BEGINS: A massive program to keep people who work for small businesses on the payrolls by funneling taxpayer dollars through their employers started today. The nation’s banks are expected to loan out the money, which will be fully repaid with interest by the government. At a press conference Thursday, Treasury Secretary Stephen Mnuchin said the guidelines are posted and the program is ready to go.

➤DEMOCRATIC CONVENTION DELAYED: The Democratic National Convention has been delayed from mid-July until the week of August 17. Milwaukee is still expected to be the host city.
Posted 3:10:00 AM