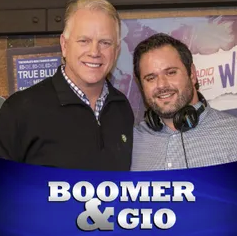 Early morning sports radio and TV hosts have such ridiculous opinions about what happens in the games because the games are on very late, and the hosts have to wake up very early. But there are no games now, so Boomer Esiason and Gregg Giannotti are talking about dogs watching people have sex.

“There is no way that I am gonna have my dog watch me make love to my wife,” is the very first thing Dennis Young at The NYDaily News heard when I turned on WFAN a little after 9 a.m. on Wednesday. The caller, a man named Sal, bragged about his “full-breed boxer,” and Giannotti agreed: “If you’re trying to have sex with a boxer in the bed, it’s not gonna work out.”

By 9 a.m., Esiason was already annoyed by the “CORONA UPDATES” that the station was playing in the mid-morning block. “These COVID updates are filled with nothing but horrific news,” he said.

Like weather or traffic on the twos, the “CORONA UPDATES” or sometimes “COVID-19 UPDATES” are introduced with a little jingle, followed by a brief update on New York City’s cases, death count, and new closures. (In this case, Andrew Cuomo had just closed playgrounds.)

“They gotta do something about those," Esiason said. "There also has to be some news associated with it that isn’t just surrounded by death… They’re so matter of fact, and so hard to take — to come back and try to restart a conversation that we had prior to that is almost impossible.”

One of the show’s producers agreed. “Every other one is a death toll … All these people are dead, now back to sports.” A producer said that they could get rid of the updates if the hosts wanted, but then backtracked and said that they’re mandated by the station. They played until at least 10, but I didn’t catch any on WFAN the rest of the day.

Without sports to analyze, there is little opportunity for shows to differentiate themselves through strength of analysis. Nuance and insight aren’t worth much when there’s no new material. Take that away and you’re left with the same technical issues everyone else is facing, with hosts, producers and guests working remotely.
Posted 3:27:00 AM