New Podcast Listeners Are Coming From Radio, Not Music

The Infinite Dial from Edison Research and Triton Digital is an annual survey that has been published for over 20 years. It is highly respected because of its methodological rigor and its year-to-year consistency over a long period of time. The 2020 edition of the Infinite Dial was released last week.

Edison Research also produces the Spoken Word Audio Report in partnership with NPR. The report, first published last November, is a new piece of research based on a national survey of over three thousand adults who consume some sort of spoken word audio—podcasts, news, sports, audiobooks—on a monthly basis.

Forbes reports The Infinite Dial shows that podcasting has been steadily increasing since 2013. Monthly podcast listenership increased 16% over last year and is now 37% of all Americans ages 12 and up. The increase has been consistent across all age groups. 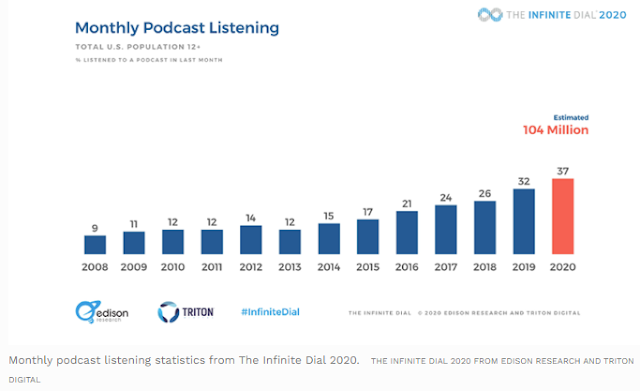 Yet the amount of time that people spend per week listening to podcasts hasn’t changed—it’s remained flat at around six and a half hours per week since 2018. The Spoken Word Audio Report says that “share of ear”—the percent of audio listening to spoken word content as opposed to music—jumped from 20% to 24% since 2014. However, only a small portion of that 20-24% is podcasts; most of it is AM/FM radio or “Other” (meaning satellite radio, audiobooks, etc.). Podcasts more than doubled since 2014 but they are currently only 17% of all spoken word audio listening. In other words, only 4% of current audio listening is to podcasts. 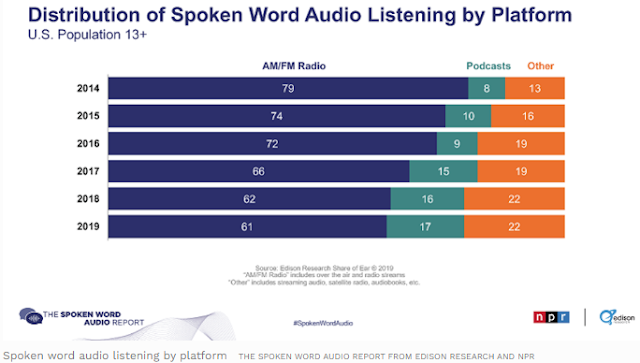 The data suggests that podcast listening is mostly time taken from AM/FM radio, not digital music. The changes in listening time derive from the sharp rise in the use of smartphones for spoken word audio listening: The Spoken Word Audio Report says that it has doubled over the past five years. 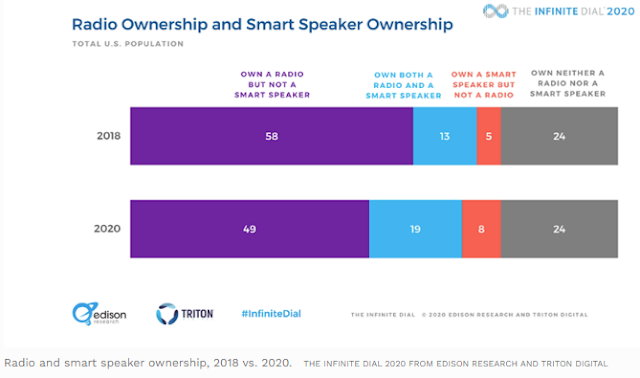 Yet listening to radio stations has dropped only slightly over the past few years. Radio still has a huge audience: The Infinite Dial says that AM/FM radio is still the No. 1 audio source in cars by a very wide margin: It’s dropped only from the mid-80% range to the low-80% range over the past several years. And an increasing (if still small) number of people listen to AM/FM stations not on traditional radios but on smartphones or smart speakers to Internet simulcast streams of the stations. Edison Research publishes another study called Share of Ear, which says that simulcast streams currently amount to 8% of overall AM/FM listening; Edison Research President Larry Rosin says that this number has doubled from 4% in 2014.
Posted 1:49:00 AM