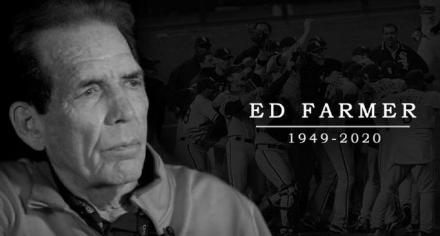 Ed Farmer, who spent 2½ seasons pitching for the White Sox during an 11-year major-league career and, for almost 30 years, was a radio announcer for the team — died Wednesday night.

He was 70, according to The Chicago Tribune.

Farmer, who was an advocate for organ donations, dealt with kidney disease most of his life. The team said he died in a Los Angeles-area hospital of complications from a previous illness but shared no other details.

A member of the 1980 American League All-Star team while with the Sox, Farmer was a full-time radio announcer for the White Sox since 1992, first as an analyst and, beginning in 2006, as a play-by-play man.

“My heart is broken, but my mind is at peace knowing my dear friend is no longer suffering,” Darrin Jackson, Farmer’s broadcast partner for the last 11 seasons, said in a statement, calling Farmer “a competitor who also was everyone’s best friend.”


We mourn the death of Ed Farmer who passed away Wednesday night.

Farmer worked as a radio broadcaster for the Chicago White Sox for nearly 30 years, played 11 seasons in the major leagues, including three with his hometown White Sox, and was a strong advocate for organ donation. pic.twitter.com/wx7itjfEYk
— Chicago White Sox (@whitesox) April 2, 2020

Team Chairman Jerry Reinsdorf, in his own statement, noted how Farmer’s broadcast work played off his experience as a ballplayer, sense of humor, love of baseball and passion for the Sox.

Farmer was plagued for years with polycystic kidney disease, an inherited disorder in which cysts form in clusters mainly around kidneys, eventually keeping them from functioning properly.

The same condition claimed the life of his mother, Marilyn, when she was 38 and Farmer was 17, in his first year of minor-league baseball.

Farmer received a transplanted kidney from a brother in the early 1990s and attempted to control his condition’s ill effects with medications, a regimen that at one time required as many as 56 pills daily.
Posted 1:00:00 AM