Ad-buying giant Magna Global is slashing its U.S. advertising forecast as economic conditions continue to worsen because of the coronavirus pandemic, which it says will have an unprecedented impact on supply, demand, and media consumption.

The Wall Street Journal reports Magna now expects ad spending in the U.S. to decline 2.8% this year to $217 billion, as industries such as travel, restaurants, movie studios and retailers are expected to severely pull back on ad expenditures. Political spending and a possible rebound in the second half of the year are expected to help mitigate some of the decline, it said. 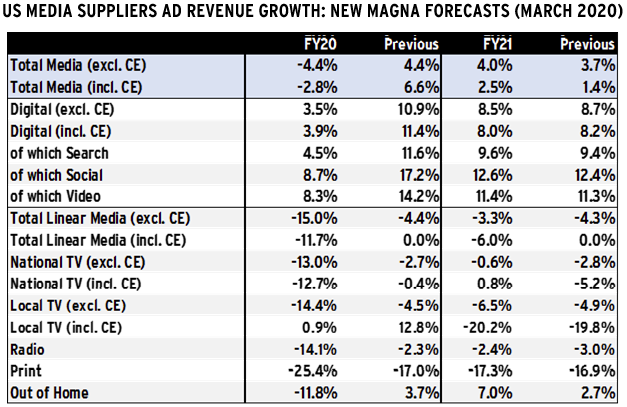 As recently as December, Magna, a unit of Interpublic Group of Cos IPG -8.59% ., previously forecast U.S. ad spending to grow 6.6%.

Advertising is often among some of the first things cut by companies looking to reserve cash in times of crisis, because it is seen as discretionary spending within many corporations, some marketers said.

“Many CEOs and [chief financial officers] see ad spending as the honey pot that can be raided by the hungry bear,” said Joe Tripodi, the former chief marketing officer of the Subway sandwich chain and Coca-Cola Co. “I expect most brands will pull back somewhat on advertising.”

Magna is also cutting its TV ad forecast, due in part to the lack of sports programming. The National Basketball Association, National Hockey League and Major League Baseball suspended operations because of the coronavirus, while the NCAA canceled its men’s and women’s basketball tournaments.