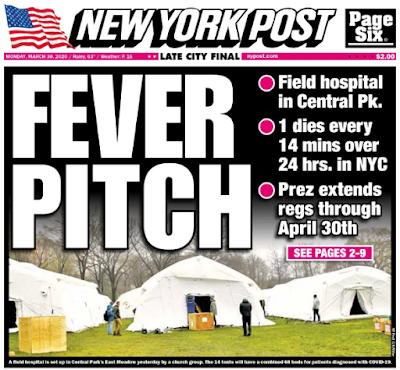 President Trump on Sunday said he was extending the administration’s social-distancing guidelines for another 30 days through the end of April, after saying for days that he was hoping to open up the country in the coming weeks.

The Wall Street Journal reports Trump, speaking at a news conference in the White House Rose Garden, said the peak of the death rate from the new coronavirus was expected to hit in two weeks. Mr. Trump predicted the country would be on its way to recovery by June 1.

“Nothing would be worse than declaring victory before victory is won,” he said. “It’s very important that everybody strongly follow the guidelines.”

The administration earlier had announced a 15-day program that instructed all Americans to avoid nonessential travel, sit-down restaurants and gatherings of more than 10 people, among other steps. Governors and mayors nationwide have rolled out their own restrictions, shutting schools and many retail businesses.

Monday marks the 15th day of the program. The president said his earlier comments that he hoped to reopen the U.S. by Easter on April 12 were “just an aspiration.”

Trump extended the guidelines as coronavirus patients besieged hospitals in New York and other cities and the U.S. death toll from the Covid-19 disease caused by the virus surged past 2,400 over the weekend, according to Johns Hopkins University. Nearly 800 of the deaths were in New York City, the American epicenter of the pandemic, and New York state’s total death toll surpassed 1,000 on Sunday, according to city and state figures.

The global death toll quintupled over the past two weeks to 33,881 on Sunday, with more than two-thirds of the fatalities in Europe, according to Johns Hopkins. Deaths reached nearly 10,800 in Italy, which has suffered the most fatalities.
Posted 5:49:00 AM