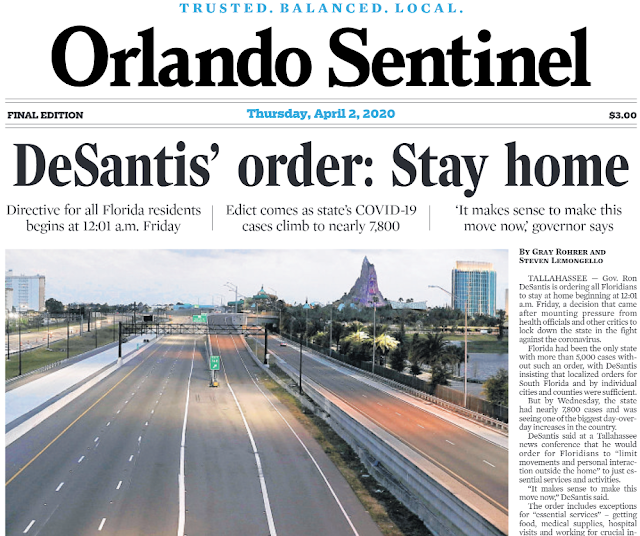 After weeks of delays, Florida Governor Ron DeSantis has finally signed an order directing the state’s 21 million residents to stay safely at home as much as possible. The order kicks in Friday and will be in place for at least 30 days. The state has about 1,000 confirmed coronavirus cases and that is probably an undercount because the state’s testing has been sparse, according to The NY Times.

Faced with grim new projections of the scale of the coronavirus pandemic, investors sold stocks again yesterday. The selloff followed a new White House estimate that the virus could cause between 100,000 and 240,000 deaths before it subsides. The Dow Jones Industrial Average was down 974 points to 20,944.

➤ENGAGEMENT PARTY BUSTED IN NEW JERSEY: Police in Lakewood Township, New Jersey, raided an engagement party and charged 10 people, including a man who is 99 years old, with violating the state’s ban on social gatherings. The owners of the home were also charged with child endangerment as there were children present. It was at least the third party in the town that has been busted up by police recently. New Jersey has the second-highest number of coronavirus illnesses after New York.

➤ZANTAC IS OFF THE SHELVES: The Food and Drug Administration has asked all stores to pull anything containing the drug ranitidine, including the brand name Zantac, off their shelves. Consumers are advised to throw away any they have in the house. Test samples contained an unacceptable level of a probable carcinogen. The contaminant is not present in competing heartburn medicines including brand names Prilosec, Pepcid and Nexium.

➤IRS BACKS DOWN ON RESTRICTION FOR CHECKS: People who receive Social Security benefits and do not submit tax returns will not have to file one just to get a stimulus check from the government. That’s a concession from the IRS, which earlier had said stimulus payments would be made only to those who filed returns for 2019 or 2018. No further action is needed by Social Security recipients.

➤WHY YOU DON’T HAVE TO HOARD FOOD: Some people are hoarding food in fear of shortages due to the spread of coronavirus, but there is little to no risk of a break in the food supply chain, according to CNBC.com. If things get really bad, there may be some disruption to imports of food and any other foreign products. But all those empty shelves you’re seeing in grocery stores are due to panic buying, not a true shortage of food.
Posted 4:11:00 AM