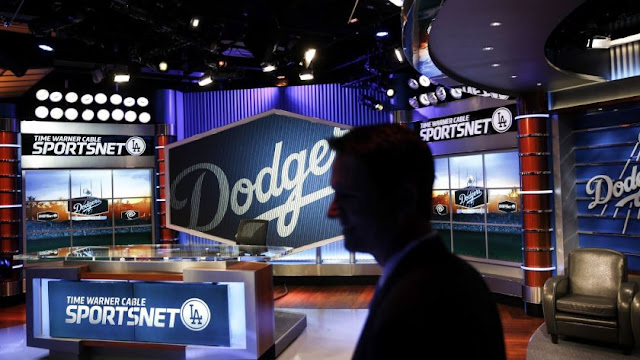 For six long years, nothing — not two trips to the World Series, not hundreds of thousands of angry baseball fans, not indignant politicians, the commissioner of baseball or even the U.S. Justice Department — could break the bitter stalemate that prevented much of Los Angeles from regularly watching Dodgers games on TV.

But Wednesday, even with the start of the 2020 baseball season delayed indefinitely, the impasse ended. AT&T added SportsNet LA, the Dodgers-owned TV channel, to DirecTV and its other television services, The LA Times reports.

In the end, old-fashioned horse trading helped bring AT&T and Spectrum TV’s parent company, Charter Communications, together to resolve long-standing differences, according to people familiar with the situation who were not authorized to comment.

AT&T is desperate for new subscribers to its upcoming video streaming service, HBO Max, which the company hopes will compete with Netflix and Disney+. Charter fits the bill because it can offer the new service to its more than 15 million pay-TV customers nationwide.

The deal underscores the increasingly treacherous landscape traditional TV providers face as streaming services such as Hulu and Netflix become more popular and longtime customers cut the pay-TV cord. Rivals are now looking to each other to help stay afloat.

The sticking point had long been the price that Charter offered SportsNet LA to AT&T and the other pay-TV providers — around $5 per month, per subscriber home. Financial terms of the deal were not disclosed and it’s unclear whether AT&T will boost its rates to customers.

Since its 2014 launch, SportsNet LA was one of the most expensive TV channels around. That irked distributors because the Dodgers channel carries live programming only six months a year, and they didn’t want to force subscribers who don’t watch baseball to pay the freight.

Charter refused to offer SportsNet LA to AT&T — or any other provider — at a reduced price. Over the years, the Dodgers enlisted members of Congress, who decried the blackout but were powerless to end it.
Posted 1:29:00 AM