Paul Berlin, the Houston radio disc jockey who guided generations of Houston listeners across 60-plus years from 1950s rock 'n' roll to the gentler sounds of nostalgia and easy listening music, has died after a brief illness.

He was 86, according to The Houston Chronicle.

For years as an announcer on several Houston radio stations and as a concert promoter at venues like the Plantation Ballroom and Dome Shadows, Berlin was the Dick Clark of Houston as an arbiter of the city's musical tastes. 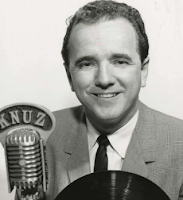 His formula, he said in a 2013 interview, was simple: "Be informative. Be entertaining. Or be quiet."

Berlin helped make hits out of songs like "Chantilly Lace" by the Big Bopper and "We'll Sing in the Sunshine" by Gale Garnett and promoted Houston concerts by acts ranging from the Tommy Dorsey and Count Basie big bands to the Dave Clark Five and Sonny and Cher.

Air checks of Berlin's shows are included in the Rock and Roll Hall of Fame in Cleveland, and he was a member of the Texas Radio Hall of Fame.
Posted 4:00:00 AM