Gabe Pressman, a son of the Bronx whose tenacity and style reflected the city he covered as New York’s best-known television reporter and commentator for more than six decades, died this morning in the city he loved. His death was confirmed by WNBC-TV, which had been his home since 1980. He was 93 and most recently reported on the St. Patrick’s Day Parade on Fifth Avenue in March.

According to deadline.com, Pressman "was among the first, if not the first, local newsmen to move from print journalism to television, Pressman was never one to read wire-service copy in front of a camera. Following an early career in newspapers that took him from The Newark Evening News to the World-Telegram, Pressman believed in shoe-leather reporting and, more important, in never taking no for an answer. That was especially true for the politicians he covered with the bone-clenching determination of a terrier. He was happily a gadfly no matter which shade of red or blue was ensconced in Gracie Mansion, pushing liberals like John V. Lindsay and David W. Dinkins, and conservatives like Rudolph Giuliani with equal fervor on issues of policy, transparency and promises unfulfilled."

For his labors, he earned 11 Emmy Awards as well as the Peabody and George Polk awards. 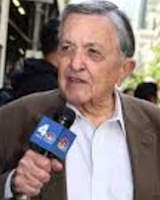 The NY Times reports Pressman worked for several newspapers, including The New York World-Telegram and Sun, and for a radio station before embarking on his television career in 1956 at WRCA, a forerunner of WNBC. Except for a stretch from 1972 to 1980 at its Channel 5 rival, known then as WNEW, he spent the rest of his working life with NBC’s New York flagship station. He was still working right up to his death: Earlier this year he covered the St. Patrick’s Day parade, as he had many times before.

In the early days of television news, when announcers often read wire stories on the air and reporting was largely left to the newspapers, Mr. Pressman did his own reporting, writing and reading his own scripts, and was one of the first television journalists to take a camera crew into the streets for stand-up reports from the scenes of fires, murders and other spot news events.

With remarkable endurance, he covered many of New York’s major stories: the 1956 sinking of the Andrea Doria off Nantucket; the arrival of the Beatles in 1964; the 1969 Woodstock festival; regional power blackouts in 1965 and 1977; and a host of elections, protests, plane crashes, subway accidents, political scandals, transit strikes and the terrorist attacks on the World Trade Center in 1993 and 2001.