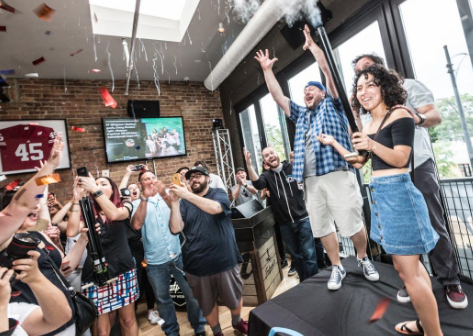 The BADASS 48 Final Event was a blowout party among parties, where listeners who qualified to win $101 cash instantly through the previous three-week text-to-win BADASS 48 campaign were on hand to pick up their prize money and celebrate the best Rock in Chicago. 101WKQX invited listeners who did not qualify to win $101 instantly to also join the party from 3-5PM, where the station picked an additional qualifier every 15 minutes until GRAND PRIZE BADASS winner was selected at 5PM. The fun continued with a post-party and a slew of other fun prizes!

For 48 hours, 101WKQX will whisk away Tisha Muentes, this year’s GRAND PRIZE BADASS winner and her guest from one once-in-a-lifetime experience to another, including rides in private helicopters, yachts, skydiving, a White Sox game – where they will throw the first pitch, luxury penthouse suites, and that’s just the beginning.

The two-day BADASS extravaganza also includes a dinner with Top Chef, Stephanie Izard, along with some other surprises along the way, including calls from Pete Wentz from Fall Out Boy, Taylor Hawkins from Foo Fighters, and Chester Bennington from Linkin Park, who will check in with the GRAND PRIZE BADASS winner to ensure that it’s a truly unbelievable, BADASS 48 hours.