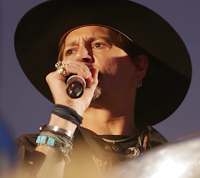 The fallout over Johnny Depp seemingly joking that he endorsed the killing of President Donald Trump continued practically unabated on Talk radio Friday.

According to The Hollywood Reporter, most radio hosts weighed in on the controversy Friday after playing audio of Depp's original comments that he made at the Glastonbury Festival in England the night before.

The reference, of course, was to actor John Wilkes Booth assassinating President Abraham Lincoln in 1865.

Depp later issued a statement to People magazine that read: "I apologize for the bad joke I attempted last night in poor taste about President Trump. It did not come out as intended, and I intended no malice. I was only trying to amuse, not to harm anyone."

The real-life attempted assassination of Rep. Steve Scalise and other Republicans on a baseball field was also drawn into the conversation by Rush Limbaugh, though only by citing a segment on Time Warner's HLN.

"He may not influence you, but there are people out there like James Hodgkinson, who did open fire at a baseball practice, and Steve Scalise almost died," Susan Hendricks says to Dominick.

Limbaugh suggested that Hendricks risked her job by taking a position "at odds" with her colleagues, and he also quoted Hendricks dragging the Walt Disney Co. into the conversation, given that Depp is the star of the conglomerate's Pirates of the Caribbean movies.

"Let's be honest. When Lincoln was assassinated, the assassin was an actor on the stage," said Limbaugh, citing Hendricks. "Johnny Depp can now reach millions of people at his little music festival there in the U.K. He's part of the Disney franchise with these pirate movies. So Depp's words are much more serious than anything, say, John Wilkes Booth could have said back in the day."
Posted 5:35:00 AM