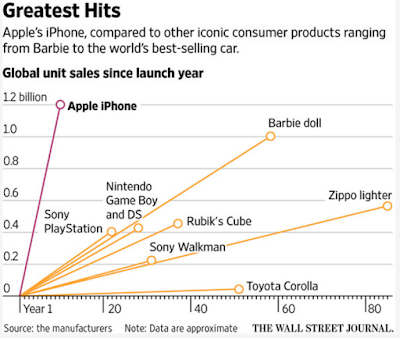 The iPhone was many things. A re-invention of the phone. The birth of the app. It was also a marketing sensation.

Steve Jobs understood that consumers wanted simplicity and style after fussing over a generation of design-challenged handsets.

WSJ has deftly chronicled the 10 years of the iPhone’s history. For marketers, the iPhone was essentially the beginning of mobile. “What’s our app strategy?” “Hooray! We can interrupt consumers with messages when they’re not watching television or reading newspapers!” “Oh no! Consumers hate it when we bombard their screens and are blocking our ads!”

The iPhone, and the smartphone more generally, is now so ubiquitous that it’s hard to imagine what communications device will succeed it in the next 10 years. As the article notes, perhaps it’s voice-activated assistants -- although that’s an area in which Apple is surprisingly playing second fiddle to Amazon and Google.

It took barely a blink of a Barbie doll eye for Apple’s iPhone to reach 1.2 billion users.
Posted 3:02:00 AM