Kelly-Jones Interview Ratings Are not Good 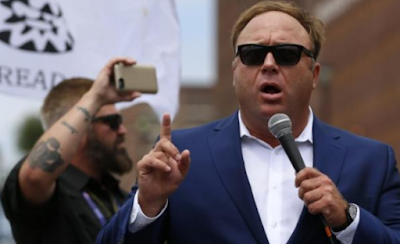 UPDATE 11:30 am 6/19: According to Nielsen data, the new installment of “Sunday Night with Megyn Kelly” averaged a 0.5 rating in adults 18-49 and 3.5 million viewers, airing at 7 p.m. The previous two episodes of the freshman news show have averaged a 0.7 and 4.9 million viewers.

(Reuters) -- NBC's Megyn Kelly defended her heavily criticized interview with conspiracy theorist Alex Jones by saying at the start of the Sunday broadcast of her program that the man who called a 2012 Connecticut school massacre a hoax has the attention of U.S. President Donald Trump.

"Some thought we shouldn't broadcast this interview because his baseless allegations aren't just offensive, they're dangerous. But here's the thing: Alex Jones isn't going away," she said on "Sunday Night with Megyn Kelly."

"He has millions of listeners and the ear of our current president," Kelly said.


NBC is owned by Comcast Corp.

The interview prompted indignation, especially in Connecticut, where 20 children and six adults were killed by a gunman at Sandy Hook Elementary School in Newtown in 2012. The local NBC affiliate in Connecticut that serves the area where the shooting took place refused to air the interview.

Jones, founder of the website Infowars, has questioned what he calls the "official story" of Sandy Hook and suggested a political cover-up took place. Although his theory has been discredited, people who believe Jones have harassed and taunted families of the victims.

Kelly said Jones never completely disavowed his previous statements about the killings being a hoax.

"I tend to believe that children probably did die there. But then you look at all the other evidence on the other side. I can see how other people believe that nobody died there," Jones said.

Kelly, who gained prominence as an anchor at Fox News, joined NBC this year. Her show made its debut on June 4.

Kelly’s interview with Alex Jones was much less interesting than the conversation that led up to the broadcast, according to Variety.

According to  TV Critic Sonia Saraiya, the decision to go after Jones actually put the spotlight on the fact that Kelly, despite the reputation she built at Fox News, is not a great interviewer. She also struggled during her much-hyped sit-down with Russian President Vladimir Putin on “Sunday Night’s” debut a few weeks ago.

"Her talent is less about extracting information from intriguing people and more attuned to leading the audience to a sense of vague unease about her subjects. As evidenced by the segment that immediately followed Jones’ — a pearl-clutching take on the phenomenon of (legal) delivery services for (legal) marijuana — Kelly’s primary mode is manufacturing and expressing concern, without much thought as to where that concern comes from and why it matters. That reluctance to dig deeper is what doomed the Jones segment. It is hard to not feel that Kelly has just emboldened Jones — an ideologue who will use any angle to advance his pernicious narrative," Saraiya wrote.


Bottom line on NBC's Alex Jones piece: Strong editing gave it an edge & made him look like a kook. Still a win for him; boosts his profile.
— Margaret Sullivan (@Sulliview) June 18, 2017


The NYTimes reports Media Matters, the liberal advocacy site that had raised alarms about NBC’s decision to cover Mr. Jones, called the segment “a well-edited investigation of the dangers posed by an unstable megalomaniac with millions of loyal fans.”

Others said Ms. Kelly did not go far enough in her interrogation, or argued that the mere fact that the segment was being aired, regardless of its handling, would only serve to raise Mr. Jones’s renown. “Still a win for him; boosts his profile,” the media critic Margaret Sullivan wrote on Twitter.

CNN notes the commercial breaks on "Sunday Night" had lots of promos and PSAs... and fewer $$$ commercials than "typically accompany a first-run program," Variety's Brian Steinberg reports. NBC sources confirm that some sponsors avoided Kelly's Jones story, but the network thinks it'll be temporary.
Posted 11:33:00 AM