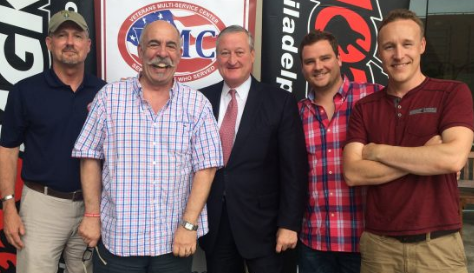 The VMC’s mission is to provide services, programs, opportunities and advancement to veterans.

“Once again our incredible listeners and generous sponsors proved that supporting our brave veterans is as important to them as it is to the WMGK staff,” said DeBella. “We are honored to be able to serve and pay tribute to them with this annual event.”

Philadelphia Mayor, Jim Kenney, appeared live on-air on Friday, June 16th, to show his support and
encourage listeners to make donations. In addition, rock stars including The Eagles’ Joe Walsh, The Who, Lynyrd Skynyrd and Peter Frampton, donated items that were used in a series of eBay auctions that occurred in conjunction with the Radiothon.

John DeBella’s wife, Lisa, along with an anonymous donor, also made a significant contribution to this year’s Radiothon. They pledged to match every $100 contribution made, resulting in a donation of $30,000…. which was made in the memory of Lisa’s father, decorated World War II veteran, Harold Kapp. WMGK advertisers also showed their generosity. Large donations came in from Certainteed, American Standard, Delaware Valley University, Golden Nugget Casino and Hotel, Always Best Care Philly and Delaware, Creamery Tire, Keswick Cycle, Hyundai of Turnersville, UFCW Local 1776, Horizon Services, and Norristown Chrysler Dodge Jeep & Ram.
Posted 9:41:00 AM