Whether drivers like the idea or not, autonomous cars will one day become a fact of life. When Jacobs Media constructed the questionnaire for its thirteenth version of its annual web-based Techsurvey, the research team included a hypothetical question about a driverless car future:

“The year is 2025. You’re driving in an autonomous car. The technology has almost totally eliminated traffic accidents, leaving you to do whatever you’d like while  in the vehicle. Which one of the following do you think you’d do most often?”

Possible options centered around media and entertainment: listening to AM/FM radio or streaming audio, watching video, talking on the phone, working on a computer, reading, or the catchall “all of the above.” To be sure that no activity was left off the list, respondents also were given an “other” choice – the chance to write in something entirely different they’d do in a driverless car than what was listed.

The initial results were predictable, with AM/FM radio leading the way, followed by “all of the above.” But what was surprising was the fact that more than 2,500 respondents took the time to share other things they plan on doing while the car is driving itself.

The “word cloud” below is a compilation of those responses. The larger the word, the more frequent the response: 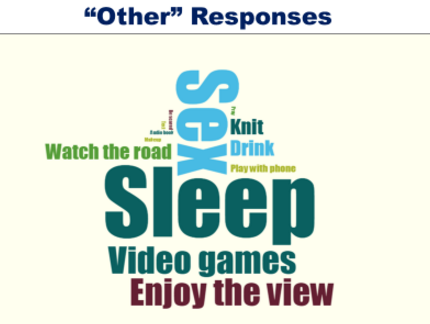 Sleeping is the lead activity, followed by having sex in an autonomous car. Playing video games and simply enjoying the view also are popular responses. It is noteworthy that drinking and knitting are also mentioned with frequency (hopefully, mutually exclusive activities).

“This goes to show that whenever new technology is introduced, consumers will find a way to adapt it to their needs,” Jacobs Media President and creator of the Techsurvey, Fred Jacobs observes.  “Because we serve broadcasters, we were curious to see how the audience might entertain themselves in driverless cars, but obviously, the respondents have a broader definition of ‘entertainment.’”
Posted 3:20:00 AM