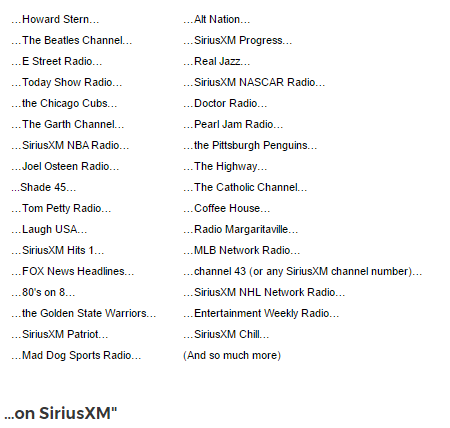 With the SiriusXM skill for Amazon Alexa, SiriusXM trial or paid subscribers will get easy access to exclusive music and entertainment, including Howard Stern's two exclusive channels, commercial-free music from multiple genres, plus news from respected national outlets, exclusive talk and entertainment, a broad range of comedy, and sports talk from some of the biggest names in broadcasting; as well as dozens of exclusive online-only channels that span music, talk, comedy and news.

"We are delighted that customers can now enjoy SiriusXM's exclusive shows, live sports, music, and news through Alexa," said Steve Rabuchin, VP Amazon Alexa. "Music, news, and sports are already some of the most popular categories of content on Alexa, and SiriusXM brings even more choices to customers. People with an Alexa device and a SiriusXM trial or paid subscription can simply enable the SiriusXM skill for Amazon Alexa, link their accounts and start listening at home or on-the-go with Alexa."

"Alexa is a leading voice service today by far and for good reason: The ease of use through the convenience of voice control with Alexa. We are thrilled to now deliver to Alexa our critically acclaimed, compelling and exclusive programming that spans all music genres, live sports, talk, live news, and comedy," said Jim Cady, SiriusXM's Executive Vice President of Products, Operations & Connected Vehicle. "Our millions of subscribers can get SiriusXM's great programming outside of the car and wherever Alexa devices can be found. It's as simple as asking Alexa to play SiriusXM."
Posted 3:24:00 AM