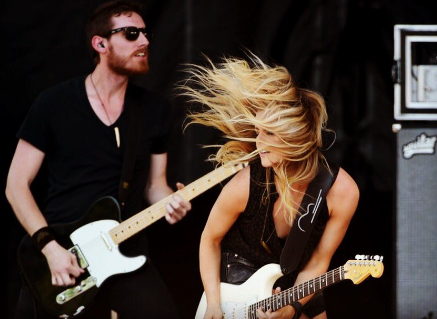 Country singer Lindsay Ell was in the car with her manager on the way back from a dinner with radio executives last week when he broke the news: Sacramento’s KNCI 105.1 FM had removed her from a multi-artist concert the next day because she’s dating someone who works for a competing media company -- popular radio personality Bobby Bones.

According to The Tennesssean, Ell had just dined with employees from the station.

Ell tweeted the news to fans Friday, saying: “Had a scheduled performance in Sacramento today for listeners. The radio station has asked me not to come bc of my personal life. Sorry guys.”

Fans swiftly responded, condemning the radio station. Hours later, KNCI issued an apology with a promise to rebook Ell’s show. Ell confirmed that her team has heard from KNCI, but said that a new show date hasn’t been finalized.

“At the end of the day, I never wanted this to happen,” Ell said Monday. “I just felt bad for the fans, they had been promoting the show for weeks.”

When the station removed her name from the concert’s poster with no explanation given, it was important to Ell that fans hear the truth from her.

“I stand firmly on the fact that I show up,” said Ell. Her new single "Waiting on You" is being promoted at radio now. "It rubbed me the wrong way … At the end of the day, my heart wants artists to be able to make music that is evaluated on its own merit and that’s it."


Ell, whose new EP “Worth the Wait” is available now, has spent months in the recording studio completing her new full-length album. Produced by Sugarland’s Kristian Bush, the album will be available in August.

As far as the canceled show, Ell said there’s no hard feelings.

“Everyone makes mistakes,” she said. “There’s so many people around the situation who are amazing and … who have supported me from the beginning of my career. What happened a few days ago wasn’t ideal for anyone, but … I’m sure we can find something to smooth it over.”
Posted 3:31:00 AM