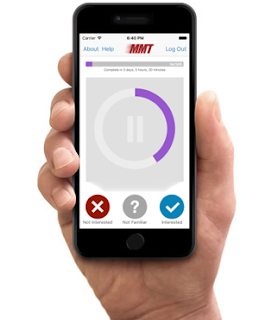 The MMT – available on Apple’s App Store and Google Play – is designed specifically for mobile devices. It uses the familiar swipe right/swipe left approach for respondents to indicate their interest (or lack of interest) in listening to specific songs on radio.

The MMT has important advantages over traditional auditorium music testing. It allows listeners located throughout radio metros to participate where and when they want to. And they’re typically given a week or more to complete their surveys, so they don’t get “burned out” evaluating hundreds of songs in one sitting.

The MMT was developed and tested for hundreds of hours throughout 2016. Respondents in pilot testing consistently described it as intuitive and easy to use. More information can be found at kassof.com, where radio executives can also request download links and login credentials.

Mark Kassof states: “It’s become increasingly difficult and expensive to get respondents to show up for auditorium music tests. With over 80% of 18-54 year olds in the U.S. now owning smartphones, it was the right time to give the radio industry a better way to engage them with a music test that goes where listeners live – in their phones.”
Posted 3:18:00 AM