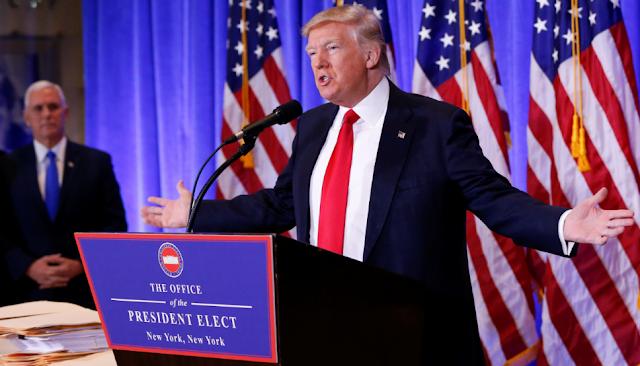 NEW YORK (Reuters) - President-elect Donald Trump on Wednesday angrily denounced unsubstantiated claims he had been caught in a compromising position in Russia and attacked U.S. intelligence agencies over the leak of the information.

"I think it was disgraceful, disgraceful that the intelligence agencies allowed any information that turned out to be so false and fake out there," Trump told a chaotic news conference only days before he takes office.

Trump called the dossier that makes salacious claims about him "fake news" and "phony stuff." "I think it's a disgrace ... That's something that Nazi Germany would have done," the Republican said.

Trump acknowledged for the first time that Russia likely hacked the Democratic National Committee and the emails of other top Democrats during the 2016 presidential election. "I think it was Russia,” he said.

But the New York businessman said other countries were also hacking the United States and defended his goal of better ties with Russian President Vladimir Putin.

"If Putin likes Donald Trump, I consider that an asset, not a liability," Trump told about 250 reporters jammed into the lobby at his New York offices.

The president-elect has long said he hopes to improve ties with Moscow but his plans have come under intense scrutiny after U.S. intelligence agencies concluded that Russia used cyber attacks and other tactics to try to tilt the election in his favor over Democratic candidate Hillary Clinton.

Trump’s comments are likely to intensify tensions between U.S. intelligence agencies and the president-elect, who initially disparaged their conclusion that a Russian government hacking campaign was aimed at boosting his candidacy.

Asked whether he had a message for Putin about hacking, Trump said many countries were hacking the United States and added that he thought Moscow would have greater respect for his administration. 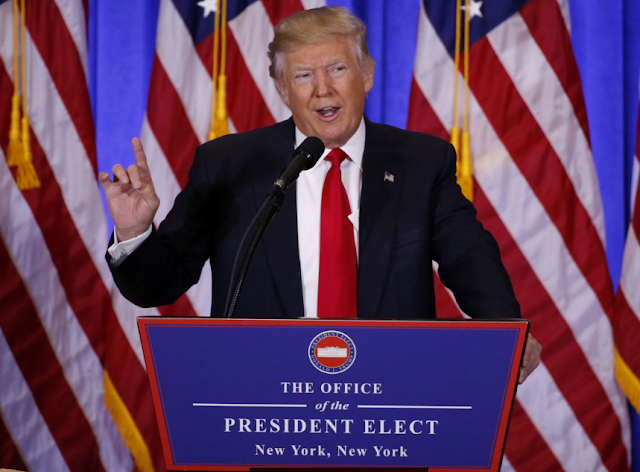 The Russia dossier that emerged late on Tuesday was first reported by CNN. BuzzFeed published the full document.

Two U.S. officials said the allegations, which one called "unsubstantiated," were contained in a two-page memo appended to a report on Russian interference in the 2016 election that was presented last week to Trump and to Obama.

In the news conference, Trump declined to answer whether anyone connected to him or his campaign had contact with Moscow during the presidential campaign.

The event was a freewheeling affair, with Trump aides cheering from the sidelines at one point and the president-elect angrily refusing to take questions from a CNN reporter.


Trump's comments on Russia were softer than those by Rex Tillerson, Trump's pick for secretary of state, who was grilled on the issue by senators at his confirmation hearing.

Tillerson, the former chairman of Exxon Mobil who received an "Order of Friendship" award from Putin in 2012, said Moscow should be held accountable for its actions during the U.S. election, although he declined to say whether he would support upholding President Barack Obama's executive order imposing sanctions for cyber-hacking.

Trump described how he will separate himself from his global business operations to avoid conflicts of interest once he takes office.

He also talked about how he plans to bring manufacturing jobs back from overseas plants, slamming drug companies for "getting away with murder" on pricing.

About 300 reporters jammed into the narrow, gilded atrium at Trump Tower to hear him reject media reports about intelligence officials investigating whether the Russian government has compromising personal and financial information that it could use against him. 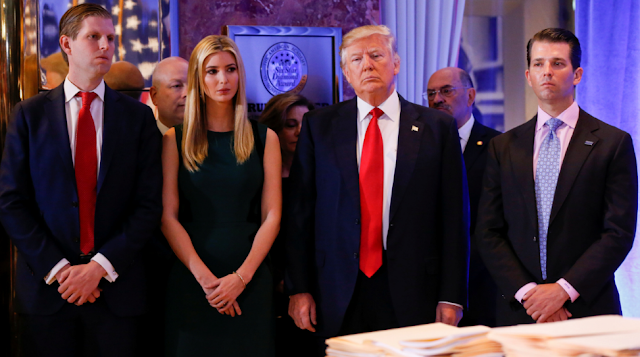 According to The Hill, ten of the 17 questions at the press conference – Trump's first since winning the election — were about the disputed reports, his relationship with Russia, the news media or the nation’s intelligence agencies.

Trump fielded the questions from a podium next to a table stacked with documents in manila folders that he said were evidence of the legal work he's undertaking to separate himself from conflicts of interest stemming from his businesses.

He was flanked by more than a dozen top aides and allies, including Vice President-elect Mike Pence, incoming press secretary Sean Spicer, senior advisers Steve Bannon and Kellyanne Conway, longtime confidante Rudy Giuliani, and his two adult sons, Don, Jr. and Eric, who clapped and cheered him on as he vented frustration at the leaks he claimed were coming from top intelligence officials.

Trump and his top aides are also furious with Buzzfeed and CNN for publishing the reports. At one point, Trump called Buzzfeed a “failing pile of garbage,” and he later shut down a question from a CNN reporter, accusing him of dealing in “fake news.”

The two reporters in CNN and Buzzfeed were markedly different.

CNN reported on Tuesday that U.S. officials briefed Trump and President Obama on allegations that the Russian government has compromising personal and financial information about him.

It declined to include any details on the specific allegations, which were uncorroborated and came from a former British intelligence agent hired by Trump’s political opponents, who put together a 35-page dossier detailing the allegations.

Buzzfeed published a story that included the specifics from the 35-page dossier, coming under criticism from many in the media in the process.

That led Spicer to begin the press conference with a fierce diatribe against both Buzzfeed and CNN.