Entercom's Sacramento Headache May Get Worse 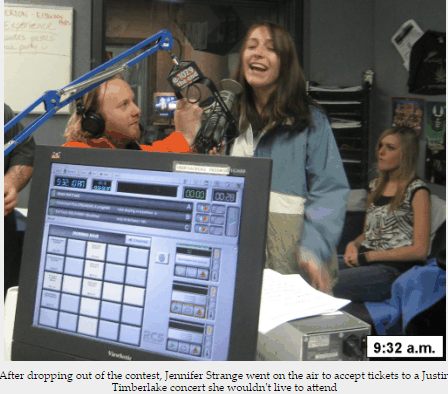 Last October the FCC designated a hearing for the license renewal of Entercom's Top KDND 107.9 FM The End.  The action stemmed from the 2007 death of a listener who participated in a contest to win a Nintendo Wii video system, valued at $250. The "Hold Your Wee for A Wii' contest required participants to drink water and hold it.

The promotion resulted in the death of 28-year-old Jennifer Lea Strange.  During the execution of the contest, a listener - self-identified as a nurse - called the live radio broadcast and warned that the game was dangerous.

Last fall, the Commission cited "information now before the Commission raises serious questions as to whether Entercom operated Station KDND in the public interest during the most recent license term."

Now, parties pushing for the FCC to deny a license renewal for KDND want the entire cluster operated by Entercom/Sacramento to be included in the proceedings

Attorneys for Sue Wilson and Media Action Center Monday filed a motion to enlarge the case to include the entire cluster and to review character issues, as demanded in the original Wilson/ MAC Petition to Deny.

From the motion: "The Commission denied this relief in fn. 122.  There the Commission repeats its crabbed, self-limiting and incorrect gloss on 47 U.S.C. Section 309(k)(1).  It then states:  “The limited scope of our review of renewal applications under the Act does not include consideration of questions of character that do not involve serious violations of the Act or Rules.”   Question:  Here, where a compliance vacuum led to a negligent homicide, what was not serious?

In the aftermath, some 10 KDND employees lost their jobs.

Says Attorney Michael Couzens, "The evidence shows, we think, that the death of Jennifer Strange was not the result of some programmers going rogue at KDND. The entire Sacramento station cluster – six stations – had become a sealed-off play area, grasping for the next quarterly rating, and unaffected by any notion of FCC rules, policies, or management control. For this 100+ station group, the renewal challenge on one station may be irritating, but it is unlikely to change corporate culture. Our petition shows grounds exist to question the compliance vacuum at all six stations."

Should MAC and Wilson prevail, the licenses for HotAC KUDL Star 106.5 FM, Sports KIFM 1320 AM, Modern Rock KKDO 94.7 FM, Rock KRXQ 98.5 Rock and Classic Rock KESG 96.9 would be on the line in the same hearing for the KDND license.

A hearing is expected in several months.
Posted 9:04:00 AM