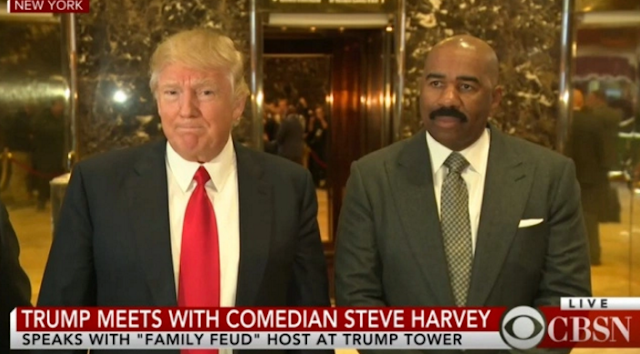 “We’re gonna team up and see if we can bring about some positive change in the inner cities, which I felt was my only agenda,” Harvey told reporters.

“He agreed, and he wants to do something. And he realizes that he needs some allies in that department. He seemed really sincere about it.”

The Chicago Sun-Times reports Trump met with Harvey at the Trump Tower in New York on Friday, but offered no details on the meeting.

“He’s a great friend of ours,” the president-elect told reporters. “Everybody knows Steve Harvey. Everyone having fun? Steve just came up to say hello.”

After Trump walked away, Harvey told reporters that he came to meet with the newly elected president at the request of Trump’s and Obama’s “transition teams.”

Harvey, who turns 60 on Tuesday, endorsed Democrat Hillary Clinton last year and came under fire over allegations his staff provided her advance questions before a February interview on his radio show.

The entertainer said Trump introduced him to Carson, Trump’s nominee for secretary of Housing and Urban Development. And they discussed help for the inner cities.

Harvey himself laughed when a reporter asked if he’s hoping to get the president-elect’s family on “Family Feud.”

“The Trumps being on ‘Family Feud’?” Harvey said.

“Yeah, against the Obamas. That’d be good. Or how about the Clintons? If I could set it up, it’d be skyrocketing for the ratings.”
Posted 5:29:00 AM