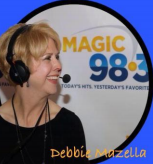 “Ever since my childhood, I wanted to be involved in radio and I’m extremely grateful to the mentors who have influenced, encouraged and helped me on my career path,” said Debbie. It’s even more exciting to know that I am the first female PD in Magic’s 40 year history!”

Debbie is a radio veteran who started her Magic 98.3 career in 2007. She added APD duties a year later. Debbie will retain her highly rated 10AM-3PM shift and will assume the Program Director responsibilities immediately.

“Debbie’s passion for our brand is second to none!” stated Dan Finn, Senior Vice President & Regional Market Manager for Beasley Media Group New Jersey. “Debbie’s solid on-air performance and leadership skills have made it an easy decision to appoint her captain of the team with the task of taking WMGQ to the next level!”

“We are thrilled that Debbie can lead this amazing radio station to new heights!” added Buzz Knight, Vice President of Programming. “She understands the marketplace and the audience lifestyle better than anyone.”
Posted 5:04:00 AM