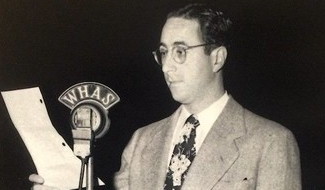 Milton Metz, a pioneer in broadcasting in Louisville and the longtime host of the talk show  "Metz Here" on WHAS 840 AM, died Thursday, according to former colleagues Wayne Perkey and Terry Meiners.

He was 95, according to the Courier-Journal.

"Every time Milton Metz clicked on the mic, people across middle America were guaranteed wit, wisdom, and balance," Meiners said.

"On or off the air, Milton was first and foremost a gentleman, bringing grace and intellect into a sometimes inelegant media landscape," Meiners said. "Rest easy, brother.  You blazed a beautiful trail and we shall follow."

Perkey said Metz was a role model and father figure for a younger generation of broadcasters that included Meiners, Perkey and Jack Fox.

“He was not afraid to ask difficult questions, but he tried to be fair,” Perkey said. “He had a great wit and he showed it. I loved him because he was Milton.”

Bob Johnson, a retired political reporter on WHAS Radio and TV, said that unlike contemporary talk radio, his show never featured “talking heads shouting at each other.”

“He had a sweet, gentle nature and his graciousness carried over into his work on the air,” said Johnson, later a Courier-Journal reporter. “I was very fond of him.”

Perry Metz said his father enjoyed “a good joke, a long conversation and listening to different points of view.

“If civility is old-fashioned, you could say he was old-fashioned,” said the younger Metz, who followed in his father’s footsteps and now runs public radio and TV stations at Indiana University in Bloomington.
Posted 3:00:00 AM