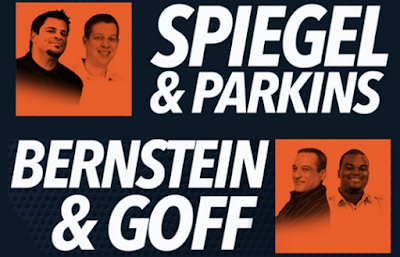 Current midday host Jason Goff will move to afternoons, joining Dan Bernstein as the co-host of The Score’s newly renamed drive show, “The Bernstein and Goff Show,” airing weekdays from 1:00-6:00 PM. Joining 670 The Score in middays alongside Matt Spiegel will be Chicago-native Danny Parkins. The duo will bring Chicago listeners the new “The Spiegel and Parkins Show,” weekdays from 9:00 AM-1:00 PM. Listeners can tune in to 670 The Score on-air, online at 670thescore.com, and through the Radio.com app.

“The retirement of beloved ‘Score original’ Terry Boers after 25 years, coupled with the exciting achievements of the station over the last year, led us straight to Jason as the perfect match with Dan in afternoons,” said Mitch Rosen, WSCR Program Director. “As a hometown native, Danny brings passion to middays, and I couldn’t be more thrilled to hear what he and Matt create together for our loyal listeners.”

Senior Vice President and Market Manager, CBS RADIO Chicago, Tim Pohlman added, “Following the success The Score has seen in the past year sharing the historic Cubs Championship with all of Chicago, and celebrating 25 years of delivering the city’s best sports coverage, I’m thrilled to see the pairing of Jason Goff and Dan Bernstein and to welcome the talented Danny Parkins to our already stellar lineup of Score hosts.”

On the upcoming change, Jason Goff remarked “I've had a fantastic time reuniting with the audience the last couple of years with a terrific talent in Matt Spiegel. The reunion now continues with a time slot and a host in Dan with whom I've experienced some of the finest moments of my career.”

“When I left Chicago in 2010 for my first radio job I had a personal goal to be back home with my own show by the time I turned 30,” said Parkins. “The fact that's going to be a reality on The Score, a station that has always been a Chicago institution, is a dream come true. I can't wait to get started and begin building the best sports radio show in the city.”

Goff originally joined 670 The Score in 2000 as a producer on “The Boers and Bernstein Show” in 2007. Goff was previously the evening host of CBS RADIO Atlanta’s 92.9 The Game, and hosted SiriusXM NBA Radio’s midday “Off the Dribble” show.

Parkins joins 670 The Score from 610 Sports Radio in Kansas City where his afternoon show “The Drive” has been the highest rated sports show in Kansas City for the last two years. Prior to his time in Kansas City, Parkins hosted sports radio programs in Syracuse, NY.  He is a graduate of the prestigious S.I. Newhouse School of Public Communications at Syracuse University, and graduated locally from New Trier High School.

With Goff’s move to afternoons and the addition of Parkins to middays, The Score’s team roster now features:
Fans can connect with all the activities at Chicago Sportsradio by following @670thescore on Twitter, Facebook and Instagram.
Posted 4:30:00 AM