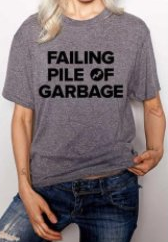 It had to sting a little when the president-elect called BuzzFeed a "failing pile of garbage" Wednesday morning, but the digital media outfit turned the insult into a branding opportunity.

Mere hours after a wide-ranging press conference Wednesday morning, BuzzFeed started selling a t-shirt ($30), bumper stickers ($5), and a "limited edition garbage can" ($49) bearing the "failing pile of garbage" label. Purchases over $45 get free shipping, and proceeds are going to the Committee to Protect Journalists. This may be the new land-speed record from sound-byte to meme to money-maker.

BuzzFeed published an unverified research document Tuesday night alleging that the Russian government has compromising information on Trump, that Trump's team regularly communicated with the Russians, and other explosive claims. An earlier CNN report said Trump and President Barack Obama were briefed on the document last week. At Wednesday's presser, Trump's first since the summer, the president-elect attacked BuzzFeed when he was asked about the allegations.