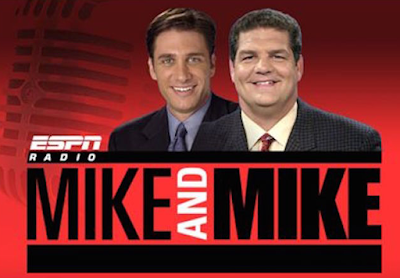 Media reports indicate The Worldwide Leader in Sports is expected to assign longtime radio host Mike Greenberg to a new morning television show, according to Sports Illustrated, thus removing one “Mike” from the popular ESPN Radio show “Mike & Mike” that has run for over 18 years.

According to the NY Post, Greenberg’s new show will reportedly air mornings from a New York City studio and feature elements of “SportsCenter,” ESPN’s flagship program.

The long-rumored move comes in the wake of several scheduling and personnel changes the network has introduced in an effort to spice up its content as ratings drop and competition rises. The network has moved “His & Hers” co-hosts Michael Smith and Jemele Hill to the 6 p.m. edition of “SportsCenter” effective next month, shifted Stephen A. Smith’s debate-style “First Take” to ESPN from ESPN2 and a week ago confirmed Chris Berman’s departure after 38 iconic years on “Sunday NFL Countdown” among other shows.

The decision to bring an end to ESPN Radio’s signature morning show, which has aired since 1998 with Greenberg and Golic at the helm, opens uncharted territory for both veteran ESPN employees. 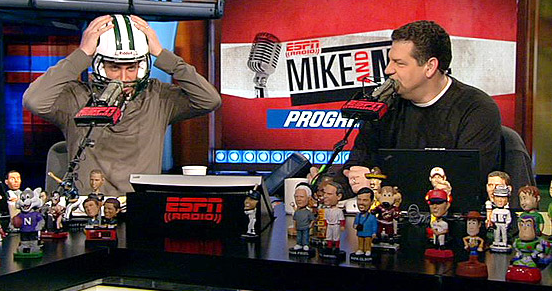 
"SI.com has learned via multiple sources that ESPN executives are moving forward with the plan to shift Mike Greenberg--one half of the long-running Mike & Mike radio show on ESPN Radio--into a new role as the lead host of a television show that would air in the mornings on ESPN. The new show will have elements of SportsCenter--which currently airs at that time--as well as a traditional morning show. It is expected to be based in New York City. The new program would put an end to end to Greenberg's on-air partnership with Mike Golic, which began in October 1998. Mike & Mike currently airs weekdays on ESPN Radio from 6-10 a.m. ET and is simulcast on ESPN2."

Outside of the 19-year run by 'Mike and The Mad Dog' on WFAN, Mike and Mike was the longest-tenured and most successful sports talk pairing in the history of the format.
Posted 5:34:00 AM