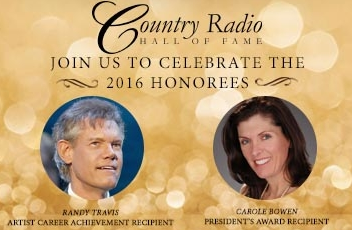 They will receive the awards on Wednesday, June 22, 2016 at  the Omni Hotel in Nashville. A cocktail receptioin will take place at 6 p.m. wit the induction ceremony to follow at 7 p.m.

“This annual event has proven to be one of the most special nights of the year in our industry, as we recognize and honor the greats in our business,” said CRB/CRS Executive Director, Bill Mayne.

The CRB Artist Career Achievement Award is presented to an individual artist or that, through their creativity, vision, performance or leadership has made a significant contribution to the development and promotion of country music and country radio.  The 2016 CRB Artist Career Achievement Award recipient, Randy Travis, is being honored for his significant career accomplishments, as well as the tremendous impact he has had on Country music as a whole.

Travis commented, “To be chosen by the Country Radio Broadcasters for a Career Lifetime Achievement Award is an honor quite unlike any other.  The artist’s and the broadcaster’s relationship is one of unspoken respect.  I appreciate so much the kindness I have been shown over the years by radio; and, I have enjoyed the many interviews I have had the opportunity to do with so many of the stations across the country.  You have each become a part of my success and allowed my fans an opportunity to know me better—as an artist and as a person.  Thank you for believing in me…and in my body of work.  It is YOU which I take my hat off to—“

The President's Award is given to an individual who has made a significant contribution to the marketing, production, growth and development of Country Radio Seminar and the multiple services that Country Radio Broadcasters provides to the Country radio and music communities.  The 2016 President’s Award will be presented to Carole Bowen. Her outstanding contributions include more than 15 years of service on the CRB Board of Directors. During that time, Bowen was a member of the board’s Executive Committee, holding an Officer position as longtime secretary for the organization. Bowen’s more than 30 years of successful radio and sales experience at WKIS in Miami played a key role in shaping the success of CRS.

Bowen commented about the honor, saying “I am deeply honored and humbled to be this year’s recipient of the CRB President’s Award.  This organization has had a tremendous impact on me both professionally and personally.  Serving within this organization has enabled me to learn from the brightest minds in Country Radio and Country Music.  It has always been a labor of love and I am very proud to have contributed to the success of Country Radio Seminars and CRB.”

The 2016 Class of Country Radio Hall of Fame inductees will also be honored at the Country Radio Hall of Fame dinner and awards ceremony. These individuals have made significant contributions to the radio industry over a 20-year period, 15 of which must be in the Country format.  This year's inductees are Blair Garner, Mike & Dana Schuff, and Lisa Dent in the On-Air category, and Mick Anselmo, Kerby Confer, Jack Reno, Tim Roberts and Jim Slone in the Radio category.
Posted 3:04:00 AM