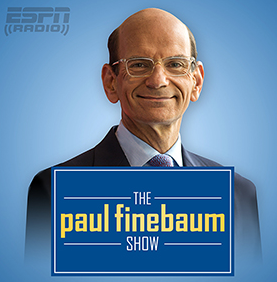 Hosted by noted journalist and radio voice Paul Finebaum, the four-hour daily radio program airs every weekday from 3 to 7 p.m. ET, showcases Finebaum’s compelling opinions and deep knowledge of the Southeastern Conference, as well as his interactions with his passionate callers, many of whom have followed him for years.

“Paul is one of the most compelling talents in all of talk – not just sports,” said Tim McCarthy, senior vice president, ESPN Radio Group. “His passion and credibility with his audience is second to none. We’re pleased to offer our network of affiliate stations The Paul Finebaum Show as part of our slate of programming.”

The Paul Finebaum Show travels alongside SEC Nation during the football season, airing from various SEC campuses throughout the fall. The show has set up shop in 20 different locations since launching as a studio show at SEC Network’s Charlotte, N.C., headquarters, including a South Carolina women’s basketball game, the SEC Men’s Basketball Tournament, the Regions Tradition Pro-Am golf tournament and the SEC Spring Meetings in Destin, Fla.

Finebaum is a longtime sports talk radio host known by many as the leading sports authority in the South and the “Voice of the SEC.” He joined ESPN in August 2013 as host of the The Paul Finebaum Show. In addition to hosting The Paul Finebaum Show, he appears on a variety of other ESPN shows and outlets, including SportsCenter, College Football Live, College GameDay and in ESPN The Magazine.
Posted 3:07:00 AM